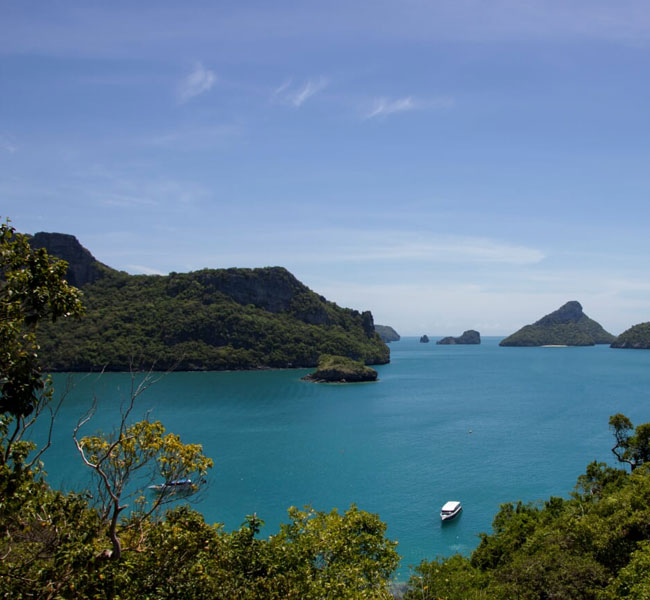 Thailand's third largest island lies 60 km from the mainland in the Gulf of Thailand. It is the largest of an archipelago consisting of more than 80 islands, for the greater part uninhabited, including the Angthong Marine National Park. Samui has a surface area of approximately 250 square kilometers and is the third largest island in Thailand after Phuket and Koh Chang. It is a beautiful island that is famed for its stunning palm tree edged beaches and crystal clear waters. Due to its broad appeal the island is visited by all types of travelers from the budget backpacker to the wealthy celebrities.Koh Samui is a delightful destination both for singles and groups.

Koh Samui, like the rest of Thailand, has generally three different seasons:dry season,hot season and rainy season. The dry season runs roughly from December to March and is defined by warm weather, little rain and calm seas. Also known as high season, many consider this as the best time to visit Koh Samui for a beach vacation.From April it’s the hot season in Samui with temperatures soaring well into the 30s C. There’s an increase in rainfall with the weather following a pattern of hot daytime sunshine followed by cooling afternoon rain showers.September through November sees the monsoon season and therefore the heaviest rainfall. Due to the unpredictable weather this may not be the best time for sunbathing or scuba diving but the upsides of visiting in low season are quite beaches and lower accommodation rates.

Warm seawater temperature is another great draw to the island. Samui’s sea stays pretty constant throughout the year at a very comfortable 29 degrees Celsius. Air temperatures average at about 28 degrees Celsius and although it gets a few degrees hotter in the summer and a few colder in the winter, there’s not a great deal of change throughout the year. 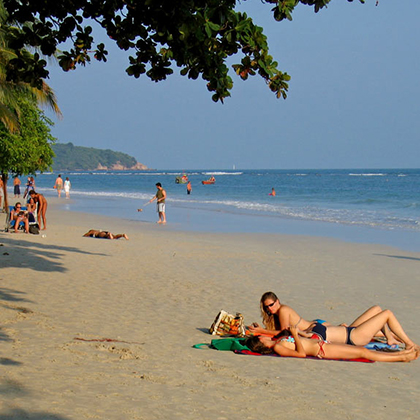 Chaweng is the busiest and biggest town on Koh Samui. It is also considered by many to be thebest Koh Samui beach. In addition to the countless accommodation options, Chaweng also offers a nightlife that is farahead of any other place in Koh Samui.Chaweng Beach offers plenty of space to stretch out on the sand, although it can get crowded at times due to the beach’s popularity. For those who enjoy beach activities there is much on offer in the way of jet skiing, water skiing, windsurfing, banana boat riding and more. The beach is 7 km long with powdery white sand, bordered by azure waters. 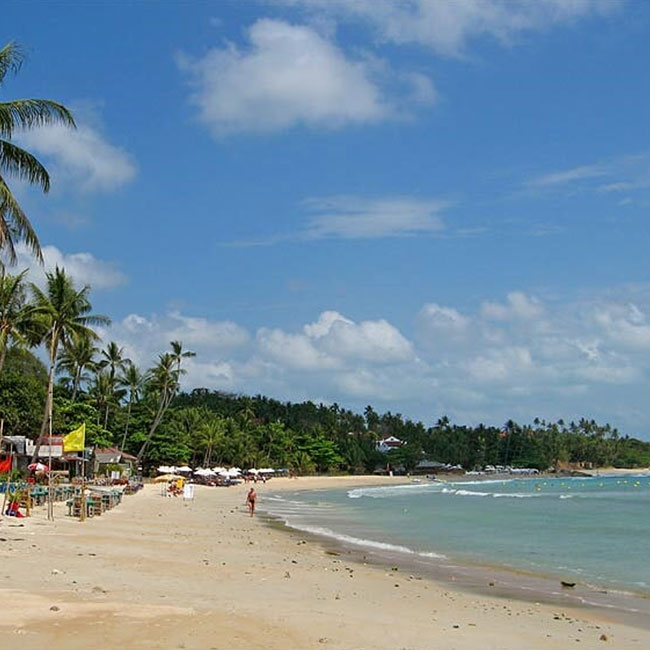 ChawengNoi beach, located just south of the main Chaweng, is one of the best beaches you can find on Koh Samui. It is well known for its beauty, quiet and peaceful ambiance, white sand, palm trees and clear blue water. Many tourists prefer this beach because of its “close to the nature”feeling. It is known as the most picturesque among other beaches on the island and also offers a lot of entertainment options. 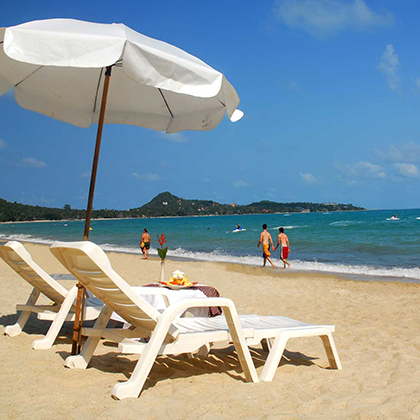 Lamaiis a stunning beach situated on the South East coast of the island.This is Samui’s second-largest resort area after Chaweng, so it provides all the amenities one would expect from a tropical vacation. There is plenty of accommodationavailable to suit every budget as well as a variety of dining options, food carts, bars, shopping, convenience stores and more.The water here is deep and clean, and on a clear day – it is of jade-green shade.The seabed is safe and pleasant almost on the whole coast of Lamai, it only gets worse on the edges of the beach.Lamai Beach is also known for its wide range of water sports. Here you can try many different activities out on the water such as jet skies, windsurfing, parasailing, sea kayaking, banana boat rides and speed boat trips. Lamai and the surrounding area has many tourist attractions, including Hin Ta & Hin Yai (the Grandmother and Grandfather rocks), Hua Thanon, Pagoda Khao Chedi, LaemSor Pagoda. 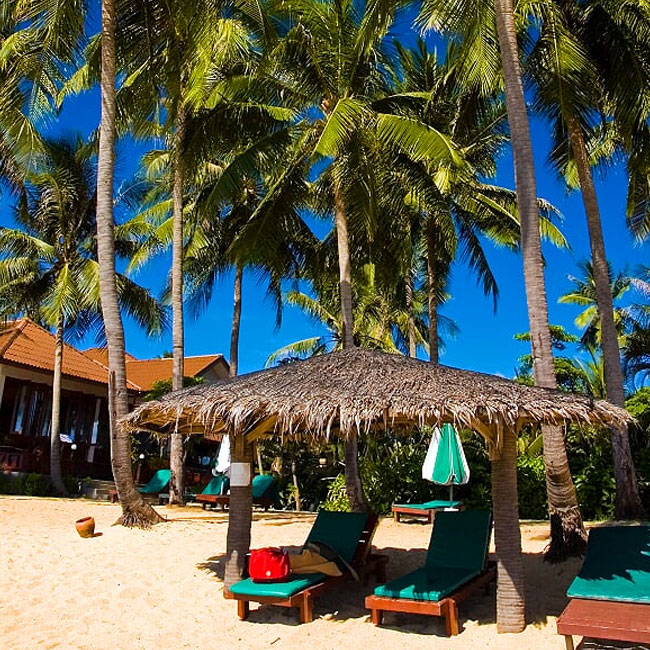 Bophut in the north of the island, offers beautiful white sand and crystal blue waters which attract many tourists throughout the year. The scenery at Bophut is beautiful and the water calm and great for swimming. The beach itself is nearly 2km long and there are some really lovely resorts here. There is a thriving village nearby with some authentically Thai things to see. Bophut’s Fisherman’s Village is a collection of chic shops, restaurants, and bars. 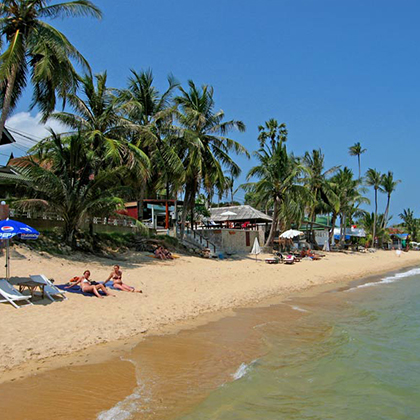 Maenam Beach is situated on the north coast of Samui. It has a smooth sand beach, suitable for fun beach activities and crystal clear waters that are great for swimming. This beach is family-friendly, perfect for families with kids as the shore is relatively shallow. In many ways, Maenam Beach is the best of both worlds in that it offers beautiful natural scenery and the right mix of restaurants, bars, and hotel.

The first stop is Big Buddha temple, a large statue of Lord Buddha on a hill top. Next stop at a strange natural formation of Grand Ma & Grand Pa. Then visit Guan Yu Koh Samui shrine. The shrine is a celebration of Chinese heritage and is dedicated to a legendary warrior Guan Yu. Visit WatKunaramto see the mummified body of LuangPorDaeng monk who died more than 30 years ago in a sitting position of meditation. His body shows few signs of any major decay. We stop at Na Muang 1 waterfall with the drop of 18 meters and a natural pool below. Free time for shopping at Nathon town.

A diving and snorkeling paradise, 70 km north of Samui, located in the clearest water in the Gulf of Thailand. It’s a home of various coral species where you canfind abundant of tropical marine life, giant clams, and colorful fish. Koh Nang Yuan is a group of three islands near Koh Tao. The pretty little islands are interconnected by a long sandy beach.The journey takes about 1.5hrs. Upon arrival, you can climb up the mountain to the viewpoint ofNang Yuan (90 meters high) or just swim, relaxand sunbath.Lunch at restaurant on Koh Tao. After lunch visit beautiful snorkeling points around Koh Tao. Explore the beauty of the underwater world with its colorful marine life amongst corals. Around 15:00 depart to Koh Samui.Arrive at the pier at 16.30.

This group of 40 islands, 250 sqkms, is located 45 km north-west from Koh Samui. It takes about 1 hour by a speedboat to get there. You will see a multitude of green isles, clear blue lagoons, mysterious caves and strange rock formations. Some islands reach up to 450 meters into the sky. There is also a mysterious sink hole, completely enclosed by walls of sheer rock. Start kayaking experience at Koh Tai Plao where you can navigate beneath a huge rock and view some of the most magnificent scenery the Gulf has to offer.Free time for snorkeling at Koh Wao or Koh Tai Plow with lots of fish and wonderful coral reefs. Climb up the steps to see the wonderfulEmerald Lake known as TalayNai, surrounded by high cliffs. After lunch free time to relax on the beach, to swim or to climb up to see the fantastic panoramic views ofAngthong Marine Park.At15:00 cruise back to Koh Samui.

Koh Tan is a neighboring island reached in 20 minutes by a long-tailed boat. Theisland is surrounded by coral reefs along white sandy beaches that both snorkelers andsun bathing lovers can enjoy.In the morning we depart from your hotel to Thong Krutvillage.Cruise to the first snorkeling site near Koh Tan, snorkel along the coral reef, see many beautiful tropical fish. Lunch at a local restaurant. Relax on the beachthen proceed to at second snorkeling site. Enjoy swimming and snorkeling again. Transfer back to your hotel.

Samui archipelago is the primary spawning grounds for the short bodied mackerel, afamous fish which appears in all sorts of Thai dishes. The archipelago’s name Ang Thong (“golden basin”) means the place with abundant marine life.The authentic fishing boat will cruise to the prime fishing sights of the season Koh Som or KohPhaNgan. At the site you can do reef fishing by hand-line hooks with fresh baits. If you have some luck red snapper or grouper will be in sight.

We will take you on an adventure to discover the beautiful landscapes around Koh Phangan –a large island near Koh Samui. The boat departs from Samui pier late in the morning. Enjoy delicious lunch on board. After lunchexplore the colorful underwater world of Koh Ma with its stunningly clear water, corals filled seabed, abundant sea anemone, and all varieties of tropical fish. The boat stops on Thong Nai Pan beach where you can simply relax in this secluded bay. Admire Koh Phangan’s rugged coastline, stunning coves and deserted beaches while returning to Koh Samui. Snacks will be served during sunset.

Drive to the south of Koh Samui. Here,surrounded by the beautiful scenery, liesanelephant camp where the guests can see daily activities of these huge animals. Starts a soft trek on elephant back for 15 minutes through the rainforest. Then continue with a short jungle walk to Namuang Waterfall 2, which is the highest waterfall on Koh Samui (80 m). Enjoy swimming in the cool fresh water. Then it is time to see some shows:

Lunch at a local restaurant and transfer back to hotel

Depart the hotel by minivan to the camp. Attend a training session, then experience zipping on cables through the green rainforest with spectacular scenery. You don’tneed to haveexperience, as the highly trained staff will guide you through every step. Fresh fruits and drinks are available after the trip. Program lasts approx. 4 hours (activities 2 hours& return transfers). It includes 33 platforms. Available for adults and young teenagers, weighting not more than 120 kg.

Pregnant women, children under 6 year old and people with surgical history less than 6 months or with hypertension, asthmanot allowed to take part.

Depart from your hotel by 4WD off road. The first stop will be WatPlaiLaem- a Buddhist temple, featuring a striking white 18-arm image of Guanyin, the Goddess of Mercy and Compassion. Then visit the famous Grandpa & Grandma rocks where you can enjoy the beautiful scenic view of Samui. Next stop is a rubber plantation; see how to tap the rubber tree to produce natural latex. Continue to a local coconut factory. Drive to the south of the island to an elephant camp. Experience 15 min elephant ride through the rain forest. Then see baby elephants bathing and anelephant show.Next see the monkey show. Lunch at a local restaurant. Then take a short walk to Namuang Waterfall 2, which is the highest waterfall of Koh Samui (80 m). Enjoy swimming in the cool fresh water. Kayaking through the mangrove forest and bird watching are also a part of the program. Return to your hotel.