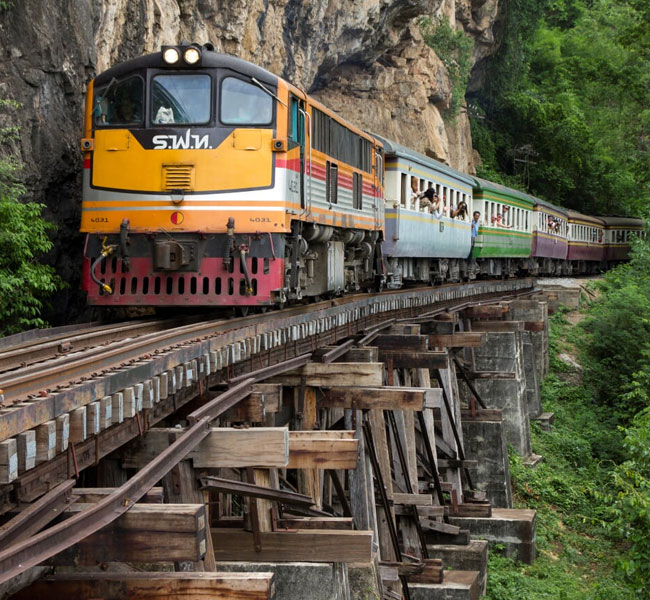 Kanchanaburi province is famous for its natural beauty, national parks, waterfalls, caves and peaceful settings. There are seven national parks in this province, many are relatively unexplored, making it an absolute must for nature lovers and adventure seekers. Adventure seekers can make treks, rafting, kayaking,spend time with elephants, discover waterfalls.

Many of its major attractions are connected with the World War II.During the war 17 000 allied POVs and over 80000 Asian laborers lost their lives building the infamous 415 km Death Railway which runs from Kanchanaburi to the Burmese border. The famous Bridge over River Kwai is located right in Kanchanaburi town. Some 30 km to the north of the town is ThamKrasaebridge. It is the longest railway bridge in Thailand. Its wooden structure blends with astonishingly beautiful scenery. You should visit the Hellfire Pass – a 400 m long cutting build by the prisoners in 1943. It has been recently restored and a small museum was built on the site. It lays out the history of the site and memorializes the victims with interviews from people who were there.

There are also other important historical sites, like MuangPrasat Singh –one of the best known Khmer-style temples in Thailand.It was built between 857 and 1157 as a religious temple of the Khmer empire.

In the far north of the province, rightnext to the Burmese border, there is a quiet town of Sangkhlaburi. It is famous for its rich and diverse atmosphere, as the town’s inhabitants originate from many different ethnic groups. The locals are mostly Mon, but there also numerous Karen, Thais, Chinese and some other minority ethnic groups. With such a diverse population, Sangkhlaburi is a unique district. Visitors like to wander through the colorful markets and trek out to the remote surrounding villages.Sangkhlaburi is mostly known for the Mon Bridge which is made from teak wood and spans 400 meters across Khao Laem Reservoir connecting the Mon Village of Wang Kha to the Thai and Karen parts of the town.

Fantastic, unique accommodation is available throughout the province alongside the famous River Kwai in the form of floating bamboo huts. There are several floating hotels providing a unique stay in one of the most naturally beautiful places in Thailand.

The scenery of two border towns in the in the mountainous border areas marks one of the most charming characteristics of Kanchanaburi. Riding on the elephant back in the woodlands, bamboo rafting on the mighty River Kwai and bullock-cart ride can be a wonderful adventure experience that you may never forget. Boat trip on the lake also offers you a dramatic view of the exotic hilly borderland – home to Three Pagodas Pass and Thailand’s longestwooden bridge. Discover some cultural practices and traditional beliefs during a welcome ceremony at ethnic Karen village. Added to this nature and culture oriented trip is a remarkable site visit to WWII related Hellfire Pass and the POW’s discovered natural hot spa. Come explore the land where mountains and forests are still alive.