When Prime Minister Prayut Chan-o-cha announced on June 16 that the country was gearing up for reopening in 120 days, many wondered if he had set himself an unattainable goal.

The country was languishing in the throes of the Covid-19 crisis and prognoses about the pandemic were not encouraging. The daily caseload was spiking at a time when the government had fumbled over vaccine procurement as it tried to figure out when the next batch of vaccines would come from.

It is now half-way through the 120-day deadline that falls in mid-October. Daily infections which peaked at more than 23,000 have retreated to around 18,000 in recent days. More vaccines have arrived with more than 120 million doses promised by the government by the end of the year.

The government is pinning its hopes on the success of the tourism sandbox programme underway in Phuket and Samui to lure back overseas visitors.

At the half-way mark to the government's mid-October reopening promise, politicians and stakeholders interviewed by the Bangkok Post cautiously agreed the deadline must be honoured as the economy cannot stay shut any longer.

The economy has been in free-fall for long enough as a result of intermittent lockdowns and public health restrictions. It must be allowed room to breathe come the middle of October, said Kla Party secretary-general Atavit Suwannapakdee.

He predicted the pandemic will still be lingering in October although reopening the country should be the rule, not an exception.

"We've reached a point where we can't keep shutting our door. We must also face the fact the government's centralised approach to handling the pandemic is out of place," he said.

"The reopening plan must go ahead. If we delay it, what the country has planned will be ruined and the country as a whole will lose its credibility," Mr Atavit added.

The government's fight against the pandemic has been less than successful with the latest lockdown and restrictions proving an exercise in futility to contain the virus. 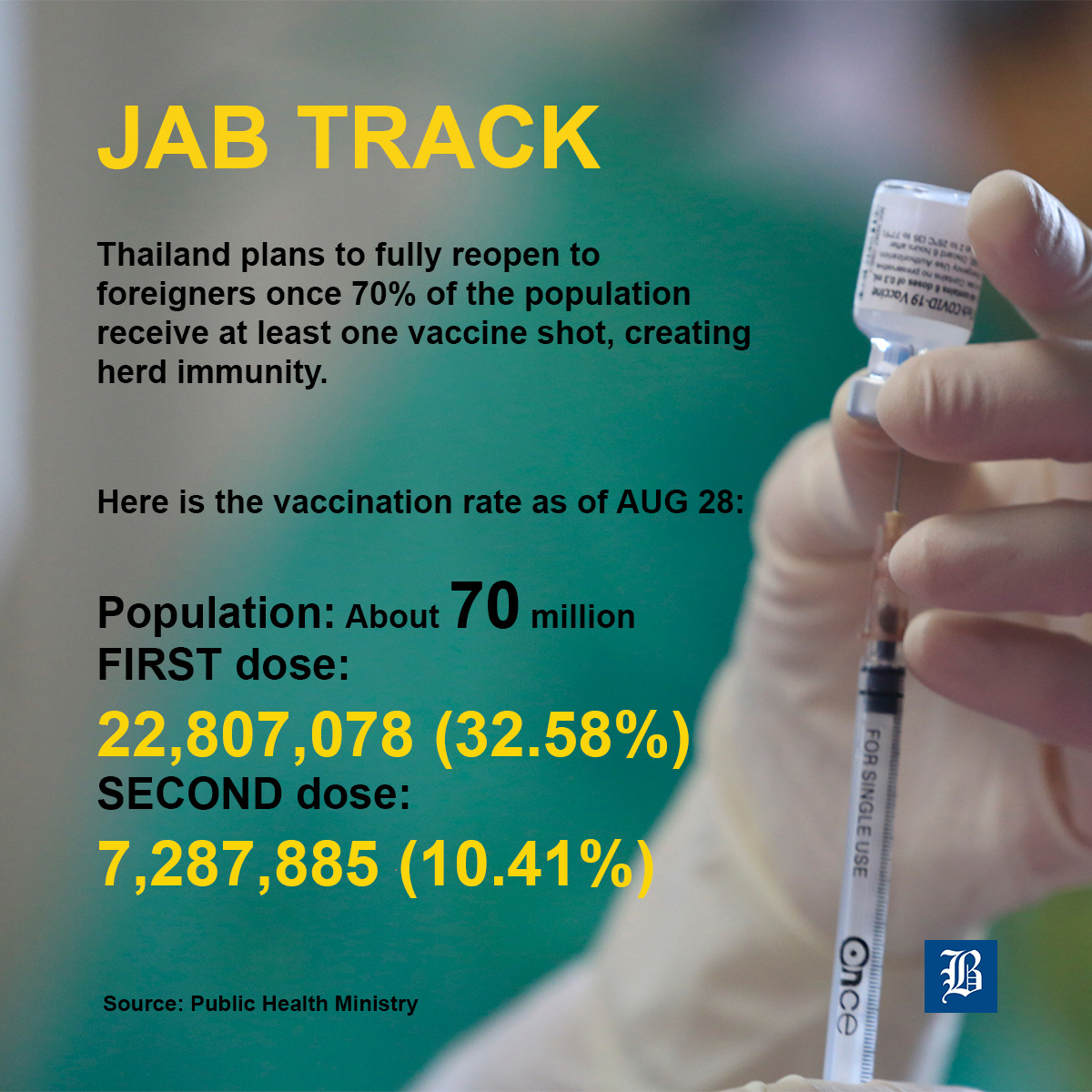 "Many won't die from the disease but from being unable to make a living," he said.

The chance of the country getting back to business in October depends on its "saviour", the vaccine.

Mr Atavit noted a strong public health sector has been the reason for an effective vaccine rollout.

Also, Thais are charitable by nature. They have rallied behind the health workers and offer them all kinds of assistance whenever they can. This has further ramped up national efforts to distribute the vaccine.

In his view, the vaccine should not be subject to authorities' approval. Registration should suffice as it can hasten imports and open up a competitive playing field that can bring down prices of the vaccine.

While the mid-October reopening may be feasible, it begs several questions, including how well prepared the businesses are to resume trade and welcome foreign visitors, according to Prinn Panitchpakdi, deputy leader of the Democrat Party and head of its economic team.

There is also the question of whether the reopening of businesses will progress in phases and if a larger quantity of alternative vaccines, for which people must pay, will be made available.

"But we must appreciate the fact that 'reopening' is subject to interpretation. Right now, Thailand is not completely closed. It's only that we imposed a lockdown which is unnecessarily intense," he said. 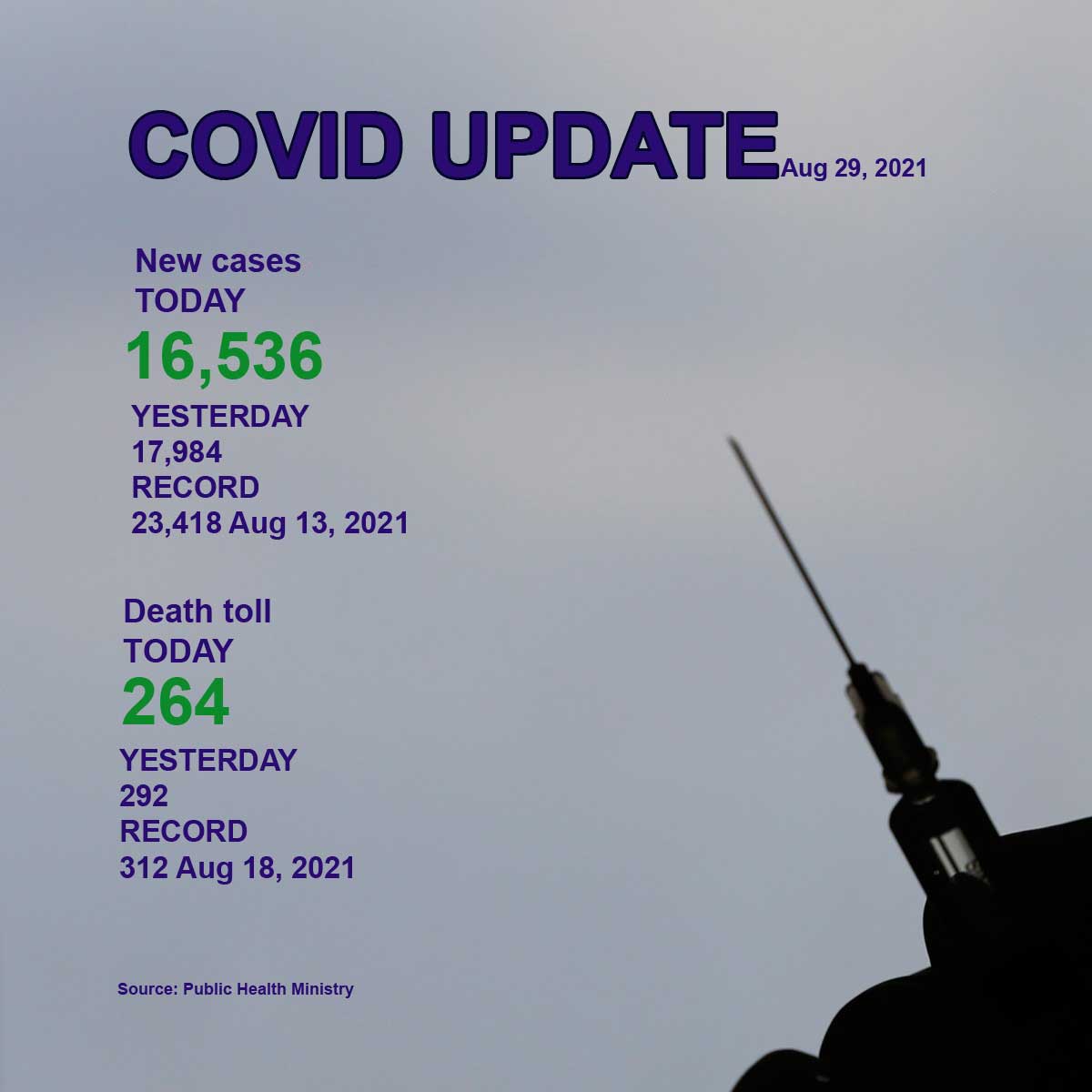 Mr Prinn said authorities must weigh carefully which visitors will be welcomed back in the early stage of reopening. "If we overlook precautions, we will be at risk of inviting a new wave of infections, as has happened in some other countries," he said.

Mr Prinn said the goal of achieving herd immunity in time for the reopening may not be realised.

Admitting it difficult to assess the country's readiness to return to business, he said the economic cost from the protracted pandemic was becoming nearly impossible to bear for people on the street.

Other repercussions in terms of mental anguish and social distress must be taken into account. A gradual reopening must be accompanied by a higher inoculation rate while public health safety measures must enforced and practised.

He expected that from mid-October, the government will expand the sandbox tourism programme to major tourism provinces served by airports. If by then Bangkok is reporting many fewer infections, it would likely join the ranks.

The longer the lockdown persists, the more damage the economy will suffer, although reopening success hinges on the number of people vaccinated, said Sanan Angubolkul, chairman of the Thai Chamber of Commerce (TCC).

The possibility of reopening should be assessed closer to the mid-October deadline to obtain the most realistic pandemic situation, he said. The outlook for the vaccine stockpile is promising as 120 million doses are expected before the year is out.

Health safety is a pivotal factor in getting the country back on track. However, it should not come at the hefty expense of the economy. The TCC has warned that economic losses brought on by the pandemic have amounted to a staggering 800 billion baht since the start of the year. The figure could top a trillion baht if Covid-19 shows no sign of improvement before the end of year.

"It would be helpful if the reopening can be launched as planned," the TCC chairman said. The business sector and the public must learn to live with Covid-19. What economic activities should resume first is not a one-size-fits-all decision.

Herd immunity not far off

However, vaccines are no magic bullet. People will also have to abide by health safety measures, practise social distancing and wear face masks where necessary.

"Reopening the country will be done step-by-step by suitable measures. State quarantine is still needed. Visitors should be fully vaccinated with papers to confirm they are Covid-free," he said.

Opas Karnkawinpong, director-general of the Department of Disease Control (DoDC), said vaccination goals are being met with 124 million doses to be procured by year-end and the daily inoculation capacity exceeding 600,000 doses.

Natdanai Kulthatyos-anan, vice president of the Federation of Street Vendors, said the government will push hard to have the country back on track by October.

However, the overseas visitors will be wooed back only if they feel confident that enough residents are immunised with vaccines which have high efficacy against emerging Covid-19 variants.

He said the federation has about 1,000 members, less than half of whom have received he jabs.

Julajira Kampong, secretary of the Chiang Mai Guide Association, said everyone in the service, hospitality and tourism-related sectors was keen to return to work.

However, the only thing standing between them and the middle of October is the low vaccination rate for workers in the tourism industry. She said about 10% of them have had vaccine shots in the province.

Pannathat Chomwong, 44, said he used to earn at least 90,000 baht a month as tour guide mainly for American tourists in Chiang Mai. Now, his life has turned upside down because of the pandemic.

He said he was happy to hear of the government's plans to reopen in mid-October. However, he was still sceptical about it.

Natthathida Anilbol, 29, said her family business on Koh Samui in Surat Thani has been closed since the first outbreak early last year. The current third outbreak has cost her business 5,000–10,000 baht of its daily revenue.

"My mother is running a buffet restaurant for Koh Samui locals to make do," she said.

Ms Natthathida said the resumption of businesses in October might be more beneficial to large hotel chains than smaller proprietors.

"Khao San road is ready as we have given the first jab to almost every business owner on this road and the area nearby. We have requested the vaccine from the Public Health Ministry," he said.

"Vaccination has not covered even 50% of the population. So herd immunity is a long way off and the jabs remain unavailable to many. Given this, it will be hard for the Tourism Authority of Thailand to devise a marketing plan to promote our country as a health-safe destination," he said.