A ferocious fire destroyed an Indian nightclub on Pattaya’s Walking Street, injuring no one, but taking 10 fire companies to extinguish.

Flames broke out at the Nashaa Club around 9:30 p.m. Sept. 12 and spread rapidly through the four-story shophouse and damaging two adjacent structures.

Nashaa, along with the rest of Walking Street’s nightlife businesses, have been closed since April and the blaze broke out after Pattaya’s 9 p.m., so the building and the street were vacant, save for a lone security guard. No firefighter injuries also were reported.

The inferno, which consumed the entire structure, sending flames shooting out on to Walking Street, could be seen from kilometers away, with a towering plume of smoke visible in nearby subdistricts.

Security guard Patvioda Srisuk, 32, said his first hint at trouble began with the sound of an explosion, suspected to be a gas cannister. That would trigger a serious of dangerous explosions over the next hour that made it extremely dangerous for firefighters to enter and battle the fames from inside. 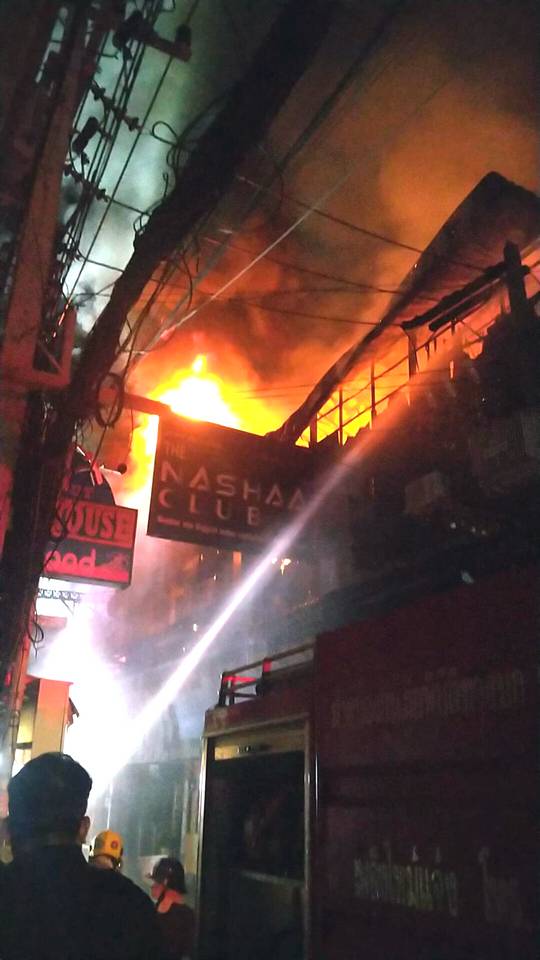 Firefighters combat the flames burning on the top floor of the Nashaa Club.

The Provincial Electricity Authority cut off power to the entire Walking Street district, to prevent shorts that could trigger more explosions. All the while, strong winds whipped the flames, which fed to flammable decorations sprinkled throughout the nightclub.

Light rain began to fell more explosions sounded. A ladder and crane truck finally made it through Walking Street’s low-hanging signs that had impeded larger trucks from entering.

Pattaya City Hall for years has complained about the signage, regularly removing those too close to the ground and, at one point, threatening to ban all signs except slim, vertical marquees placed on the fourth floors of each building as they do in nightlife sections of Tokyo, Seoul and Phnom Penh.

The 2017 threat went nowhere after bar owners refused to change signage until the city fixed the street’s power grid, which hasn’t happened until this year.

Pattaya Disaster Prevention and Mitigation Department officials classified the fire as nearly a Category 7, one of the worst on record, with heat the made it nearly impossible to approach. They feared the building’s metal roof would collapse, but the blaze was controlled fast enough to prevent any parts of the shophouse from falling.

By nearly 11 p.m. the flames were brought under control, although firefighters would spend the next few hours stamping out small fires and ensuring smoldering timbers didn’t reignite.

Fire officials and police will spend Monday crawling through the gutted structure to determine how a fire could have suddenly have broken out in a building that has been closed and vacant for five months and why so many potentially leaky gas cannisters were stored there.

Residents of Walking Street rushed bottles of drinking water to the firefighters working under intense heat.

Based on the number of “for sale” and “for rent” signs across Pattaya during the coronavirus pandemic, nearly all bars in the city have gone, or are close to going, bankrupt. Owners have been deprived any sort of compensation for the government, leaving owners few options to recover their losses.

Sunday’s fire is not the first at Nashaa. A small 2016 blaze by the cashier’s stand caused about 2 million baht in damage. The club was full at time, causing a panic, but no one was injured.

Nashaa once billed itself as the “biggest, most famous and No. 1 Indian nightclub” in Pattaya, with lines – even during the few months it was open in 2020 – with lines of Indian men out the door.

But those Indian tour groups and solo travelers are gone and not coming back any time soon. While Thai embassies are issuing Certificates of Entry to westerners with only minimal fuss, applications from India are being rejected almost universally, due in large part to the coronavirus delta variant outbreak, which began in India.