BANGKOK — A naturalistic public park has arrived in Bangkok and it’s not to be missed.

Phase two of the Benjakitti Park, opened quietly last December, offered visitors a new and different experience from other public parks – it is modern, minimalist and naturalistic.

Highlights include a nearly two-kilometer long skywalk crisscrossing a lovely view of wetland peppered with mounds of earth forming tiny islets below. There’s also a separate walking trail at ground level. The paths, both on the upper and lower levels, encourage you to keep walking and explore. They are laid out seemingly at random, making getting lost fun.

Converted from a land formerly part of the Tobacco Authority of Thailand with an entrance from Ratchadaphisek Road, one can see some high rise buildings enveloped from all directions. Yet, the feelings are more lost in nature because the naturalistic park requires a five-minutes walk from the entrance of the old phase of Benjakitti Park. 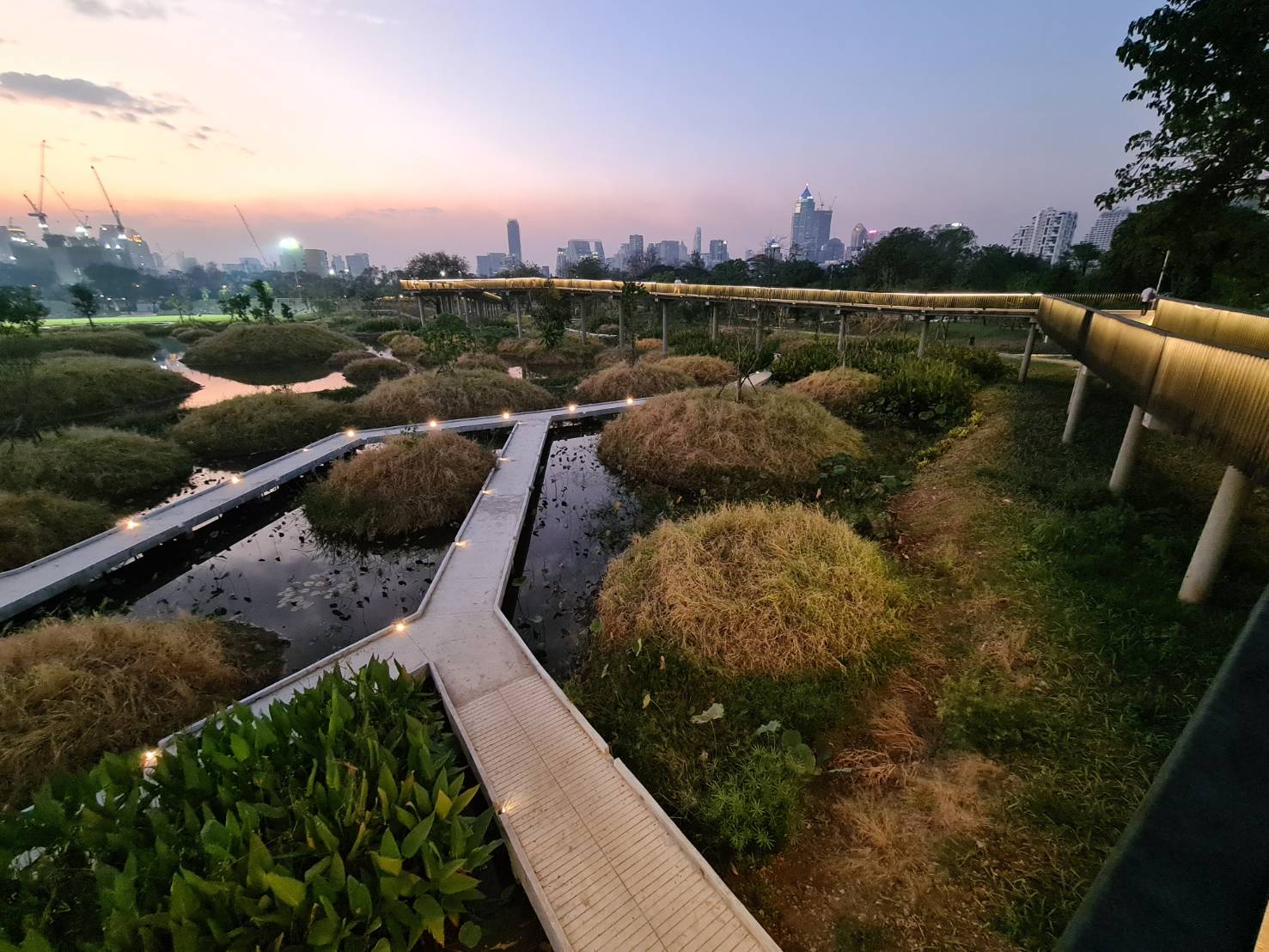 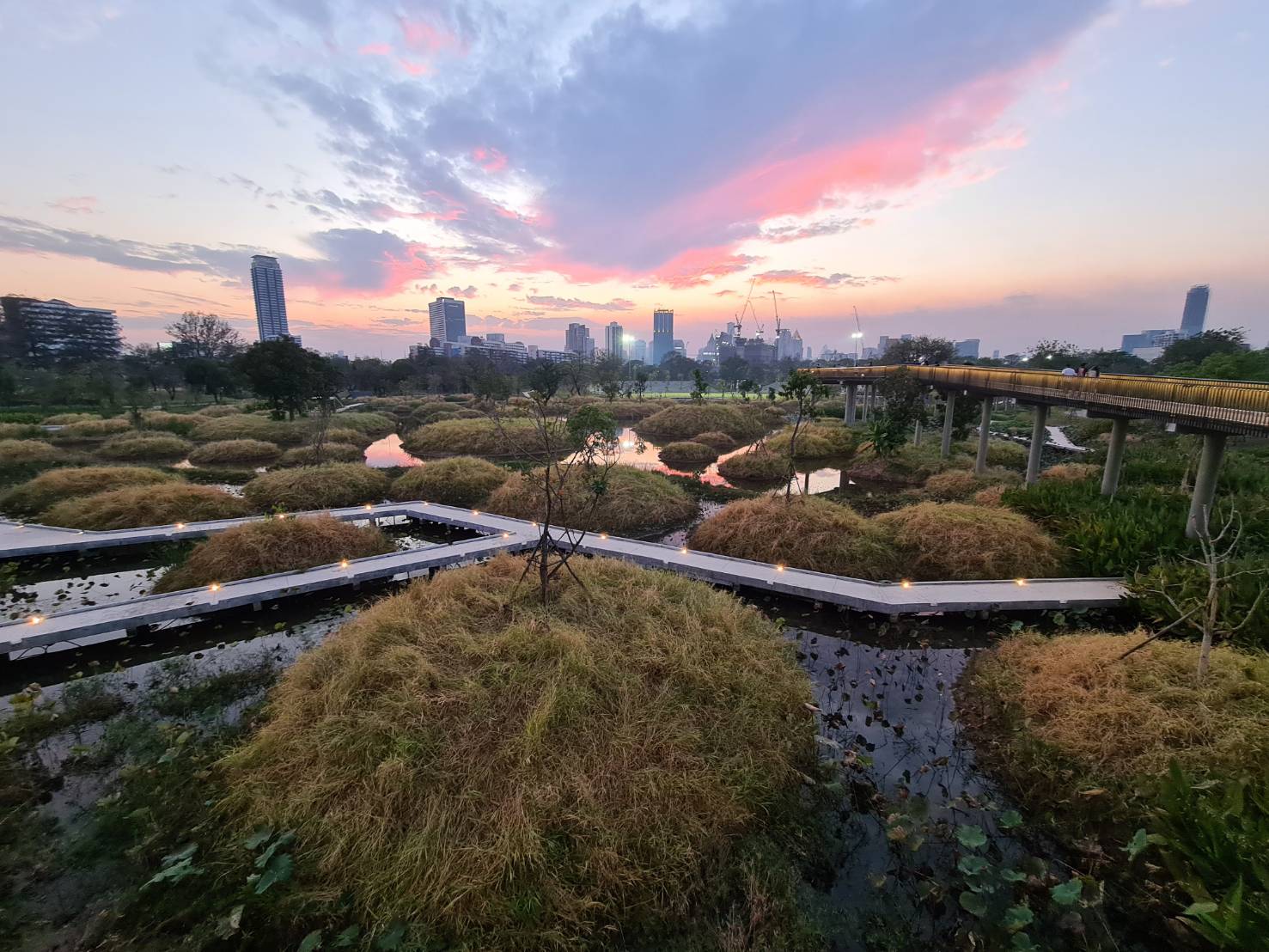 This means if you are standing at the center of the new park, which is adequately large at 61 rai excluding the final unfinished phase, you won’t hear any traffic noises despite the fact that you’re just a 15 to 20 minutes’ walk from BTS Asok station and Sukhumvit station of the MRT underground.

Operated by Bangkok City Hall, the park includes some existing mature rain trees, younger teak trees, and many planted saplings of species found in the forests that would markedly make the place even greener and more picturesque within a few years.

At the moment, sun lovers should visit the place during mid-afternoon for a good tan and more desolate environment. After 5pm, more visitors will arrive and some joggers would make strolling on the skywalk a less Zen experience. 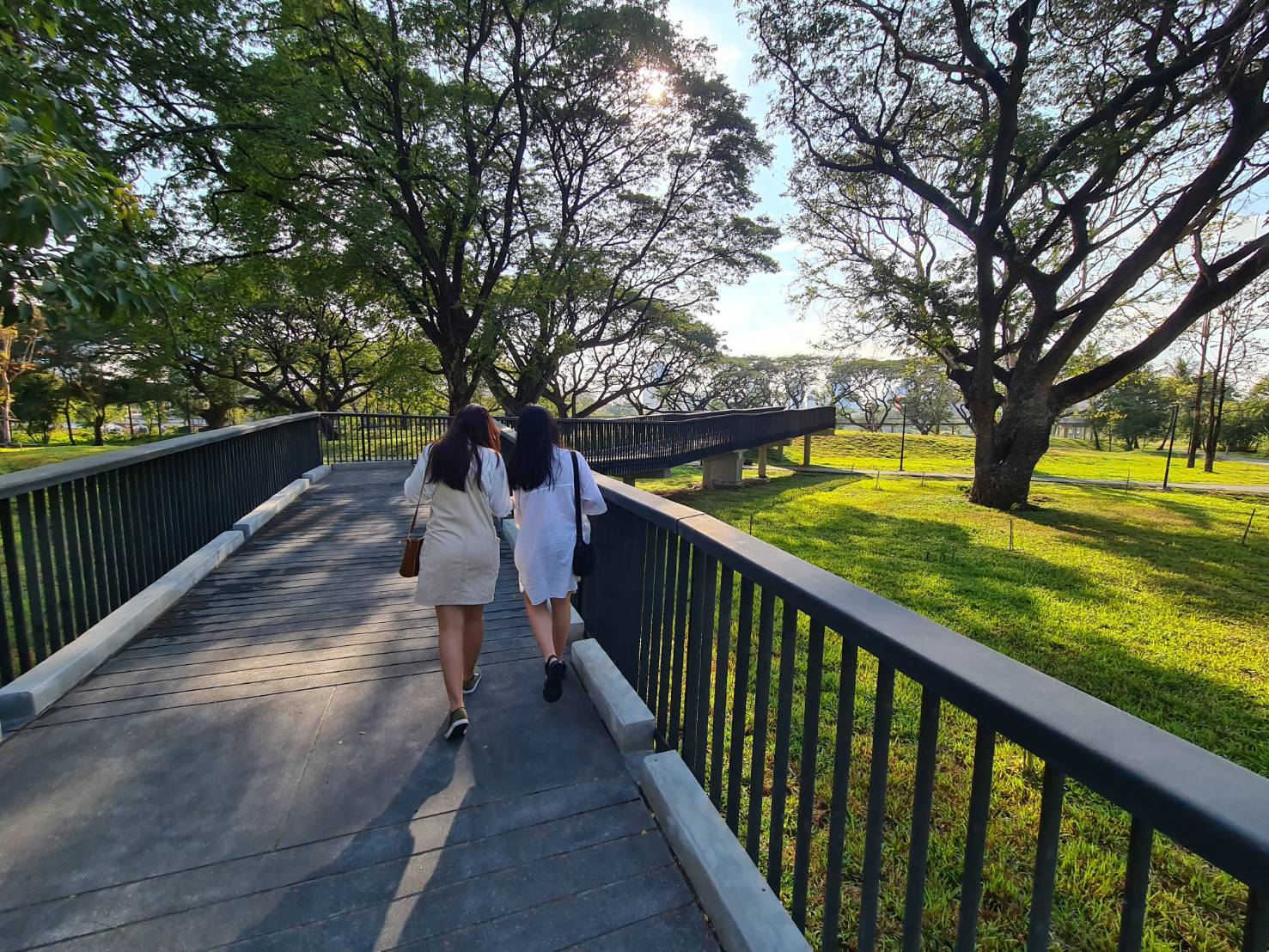 Despite the Tadao Ando-esque use of bare concrete around the landscape architecture, the elevated walking path, which is over 2 meter wide and nearly two-kilometer long, has no bench for park goers to sit. One has to seek them at ground level. There’s also a bike lane around the park for cyclists between 6am to 5.30pm.

On the western end of the park, there is a large grass lawn surrounded by a half amphitheater. There are 12 levels of slope made of bare concrete where one could just sit and watch the views of nature, the skyline, and other people relaxing and playing frisbee. 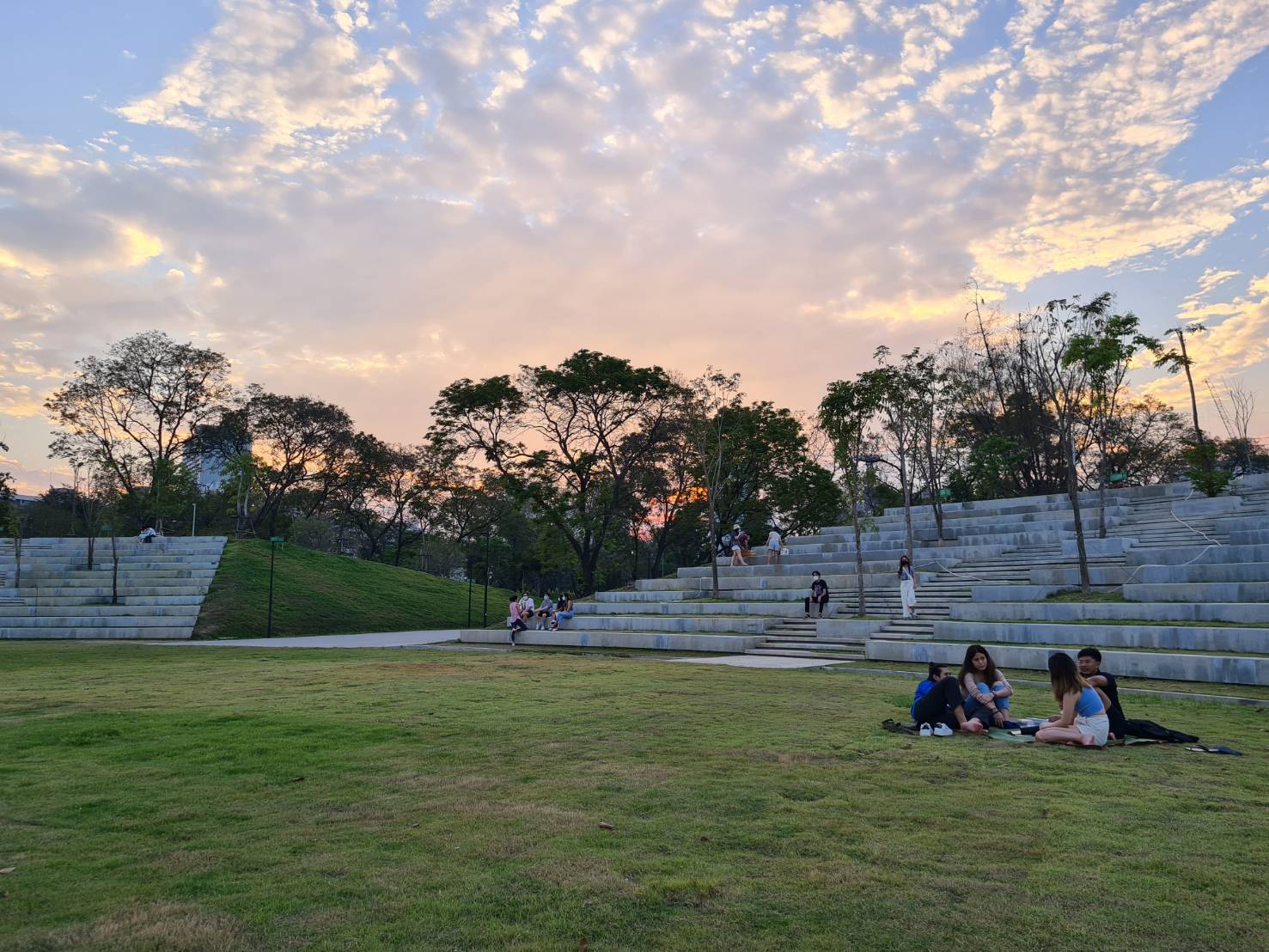 The crowds? They are mostly expats and affluent international school students, both Thais and non-Thais. Some middleclass Thais are also coming here to jog or simply taking selfies for their Instagram stories.

All in all, this is the real deal, a new public park for Bangkokians and even visitors to the city to enjoy.

Benjakitti Wetland Park is part of the old Benjakitti Park. The entrance is located on Ratchadaphisek Road, next to Queen Sirikit Convention Center. It opens from 5am to 9pm daily. 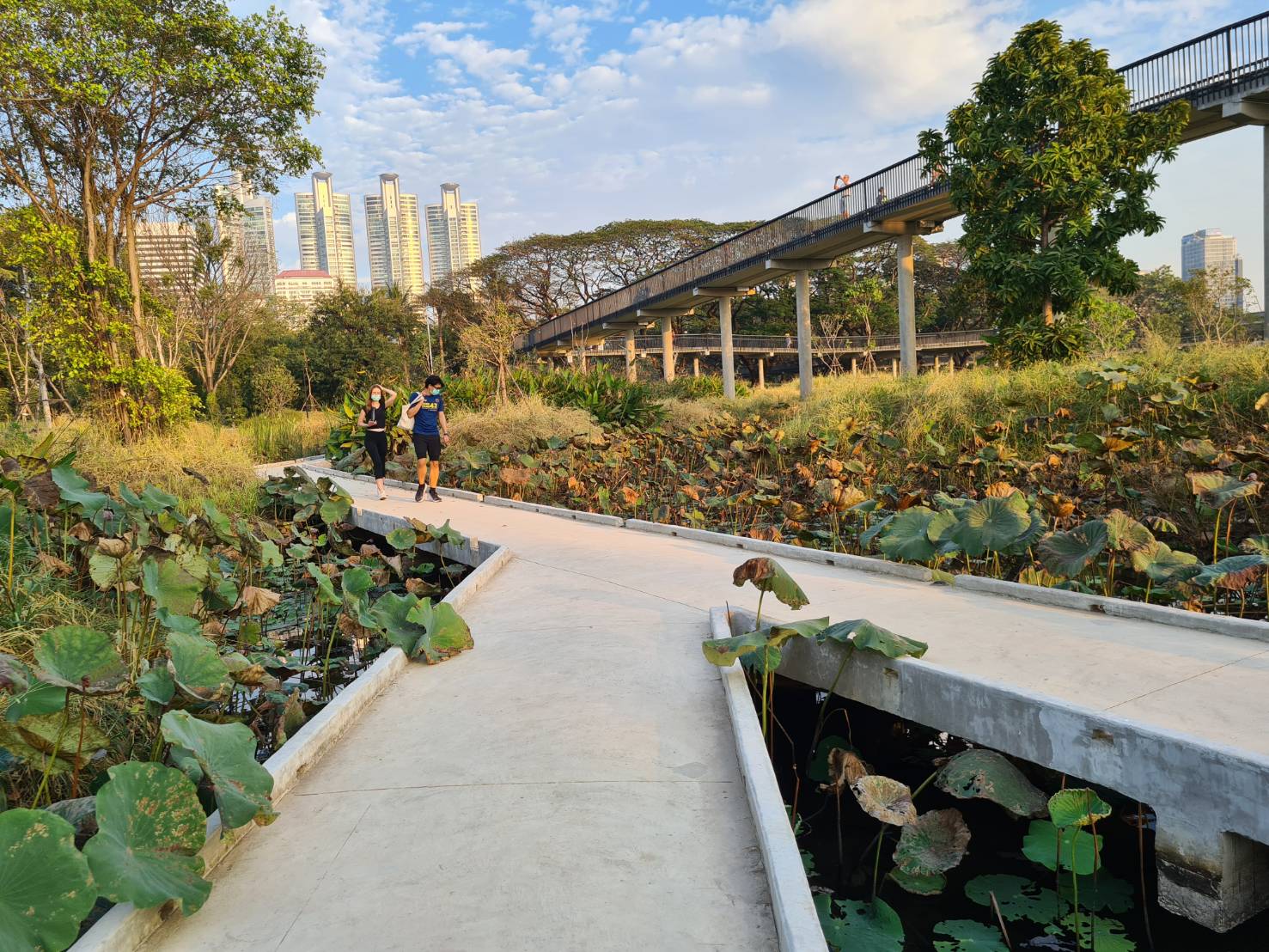 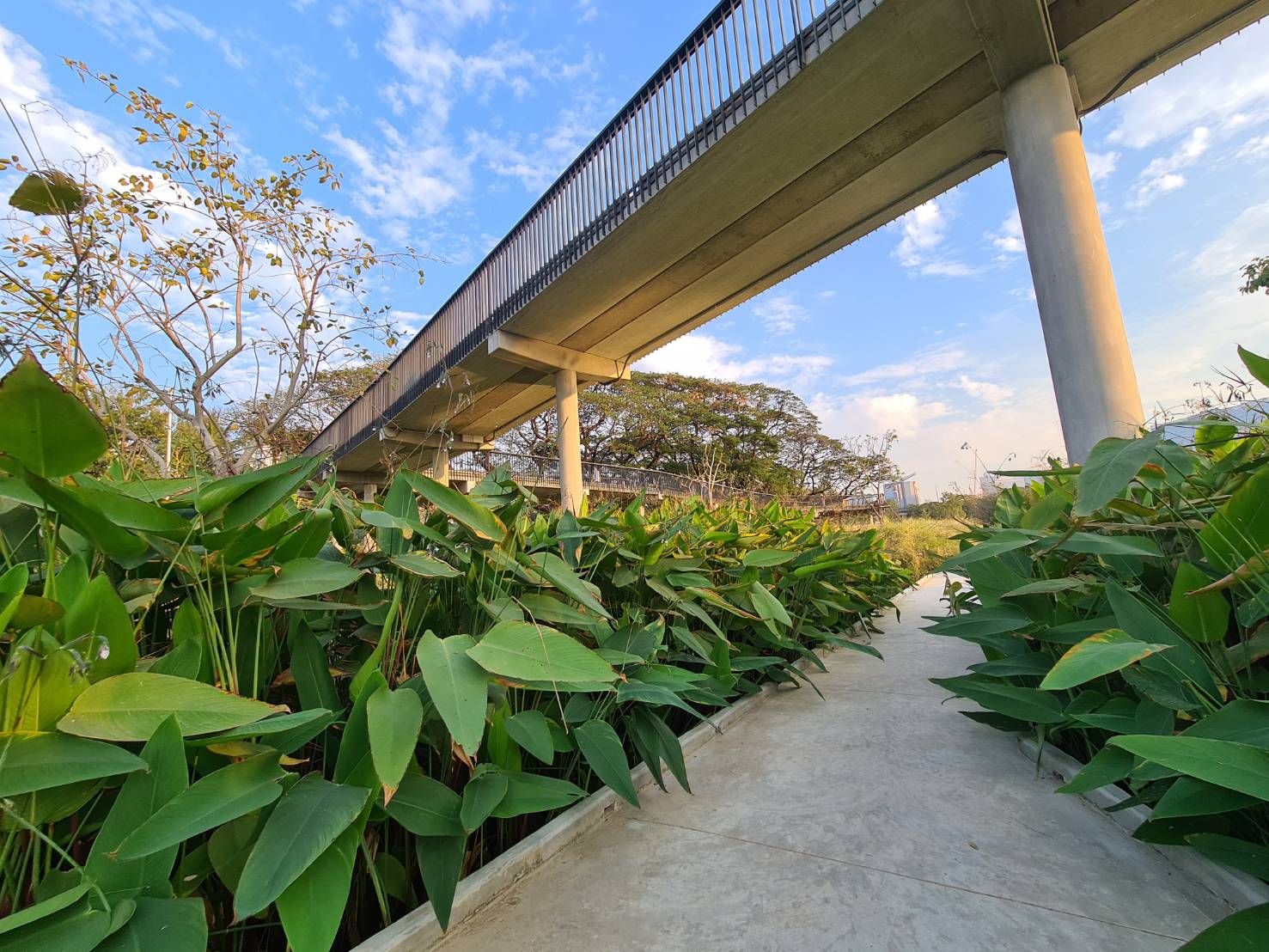