A Stroll Down History Lane

Bangkok is once again under strict disease control measures and residents continue to work from home to curb virus transmissions. Although restaurants, supermarkets, public parks and convenience stores are required to close at 8pm, families still have some recreational options available on the weekend.

One of them is the Bangkok National Museum, which is offering a series of new exhibitions. After being smuggled out of Thailand around five decades ago, a pair of ancient lintels have finally found their way back home and are on view at the Issaravinitchai Royal Hall until Sept 30.

The exhibition "The Return Of The Lintels From Prasat Nong Hong And Prasat Khao Lon To Thailand" will chronicle their lengthy journey and allow future generations to appreciate the opulence of Thai cultural heritage.

These two lintels were crafted to be significant architectural features for highly revered sanctuary compounds -- reminiscent of Khmer-style influence -- in Buri Ram and Sa Kaeo, according to a report on excavations of ancient monuments conducted by the Fine Arts Department in 1959 and 1960. 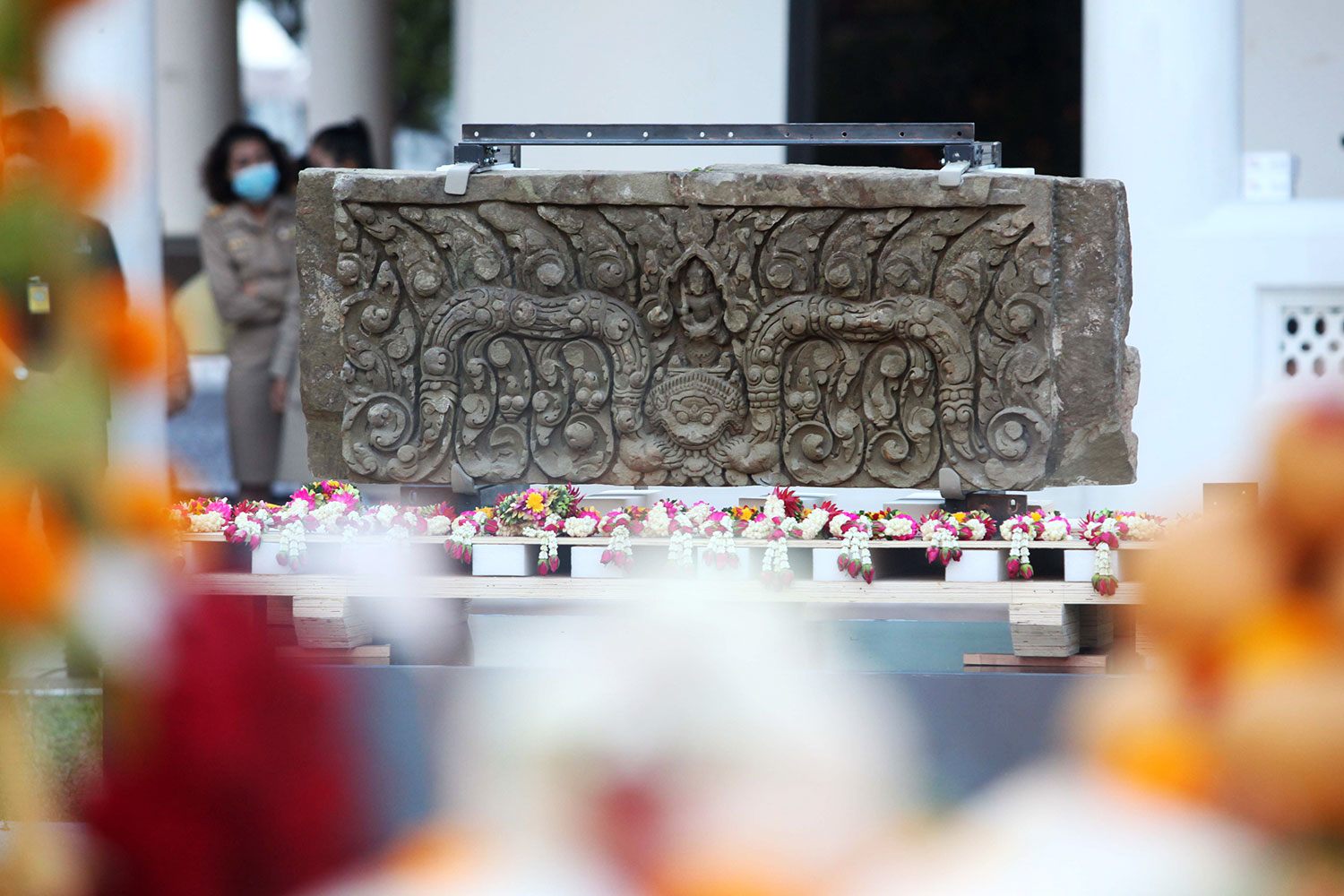 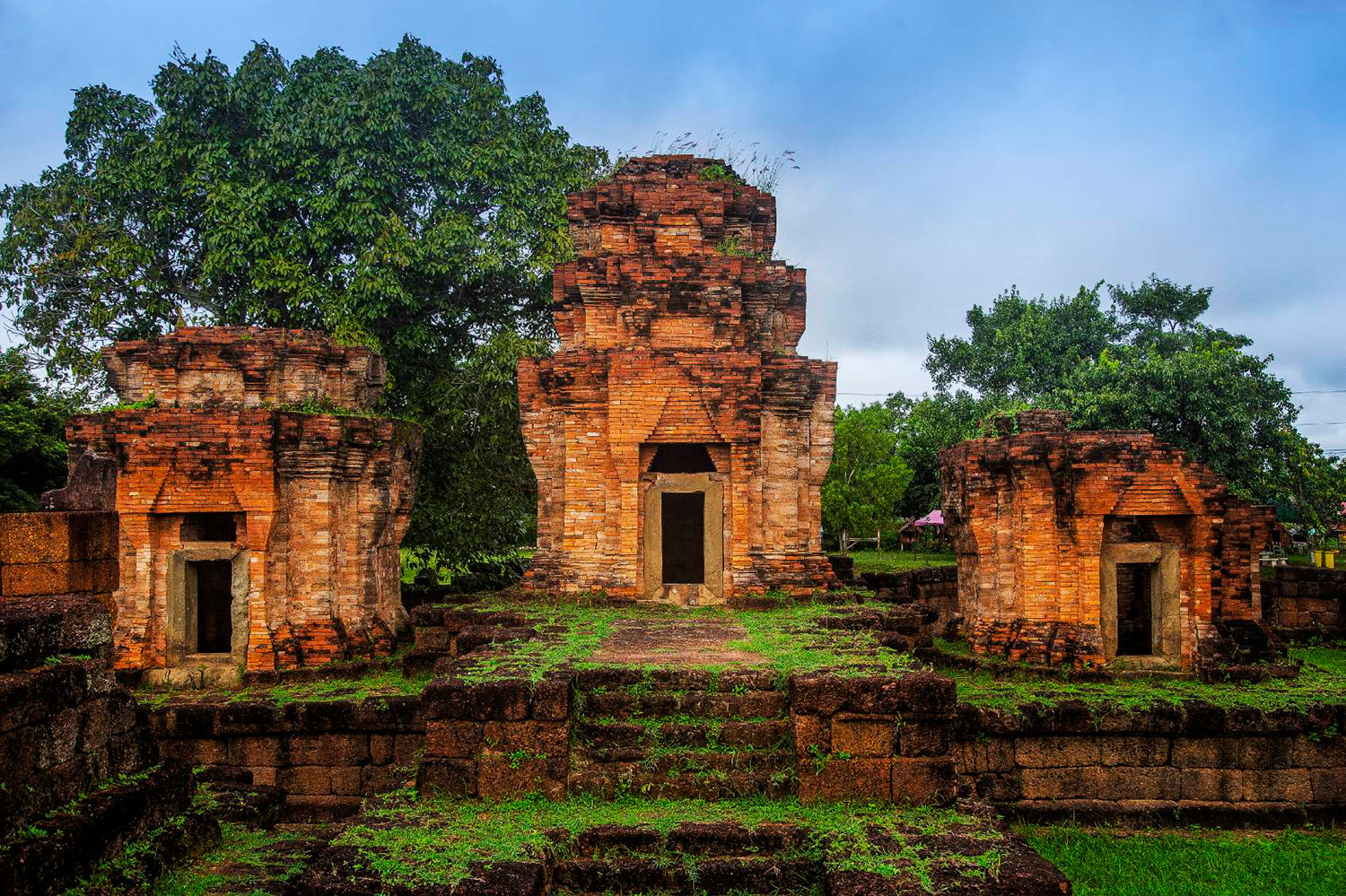 Prasat Nong Hong in Buri Ram was first listed as a national ancient monument in the Royal Gazette in 1935 and boasts three Khmer-style brick prangs on a laterite square base.

"The notion of collecting antiques began in Europe and came to Thailand during the reign of King Chulalongkorn. At that time, the first museum was established but artefacts were still being exported as part of commerce, while foreigners who worked with various Thai authorities were frequently given art objects like ceramic ware as gifts. Furthermore, it's possible that some artefacts were taken out of the country during the Indochina War and Cambodia's civil war," said Prateep Phengtako, director-general of the Fine Arts Department.

Dating back to the 16th and 17th centuries, the site is home to three Khmer-style brick prangs on a laterite square base, whose south tower was once embellished with a carved stone lintel the depicting god Yama (god Shiva) riding a buffalo (the Nandi bull) above the Kala face.

In Sa Kaeo, Prasat Khao Lon stands on its namesake hilltop atop Khao Lon and was designated as a national ancient monument in the Royal Gazette, Volume 52, published on March 8, 1935. The timeworn sandstone lintel is beautifully carved into leaf motifs surrounding a Kala face, according to a survey conducted by the Fine Arts Department's 5th Regional Office of Fine Arts in 1960. These two ancient lintels were stolen and reappeared in the Asian Art Museum of San Francisco, California.

"Our mission focuses on ancient architectural elements in historical sites which no one can claim ownership over. It's different from other antiques like votive tablets and tableware that anyone can possess and pass down from generation to generation because they were exported goods during the Ayutthaya period," Prateep said. 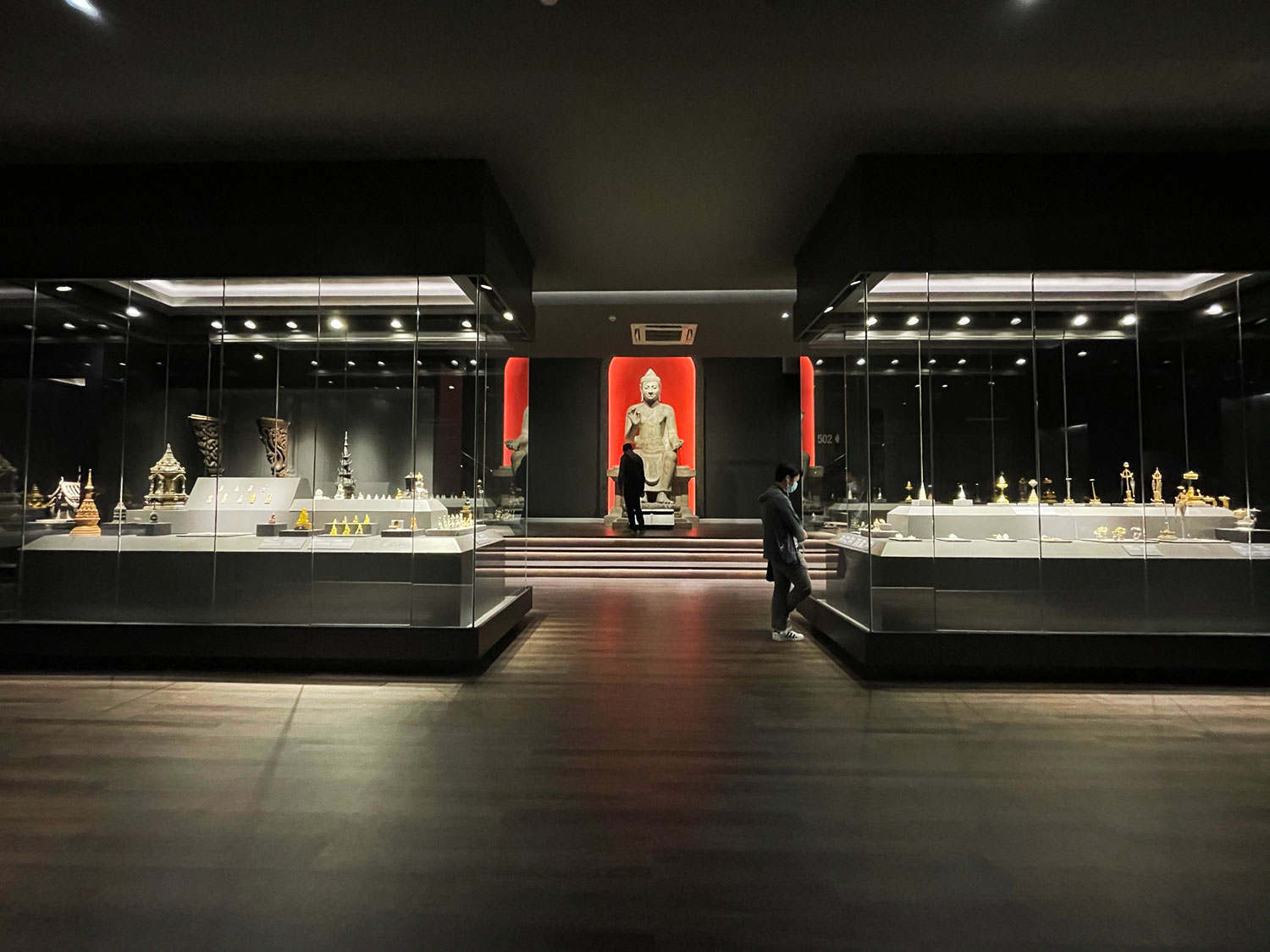 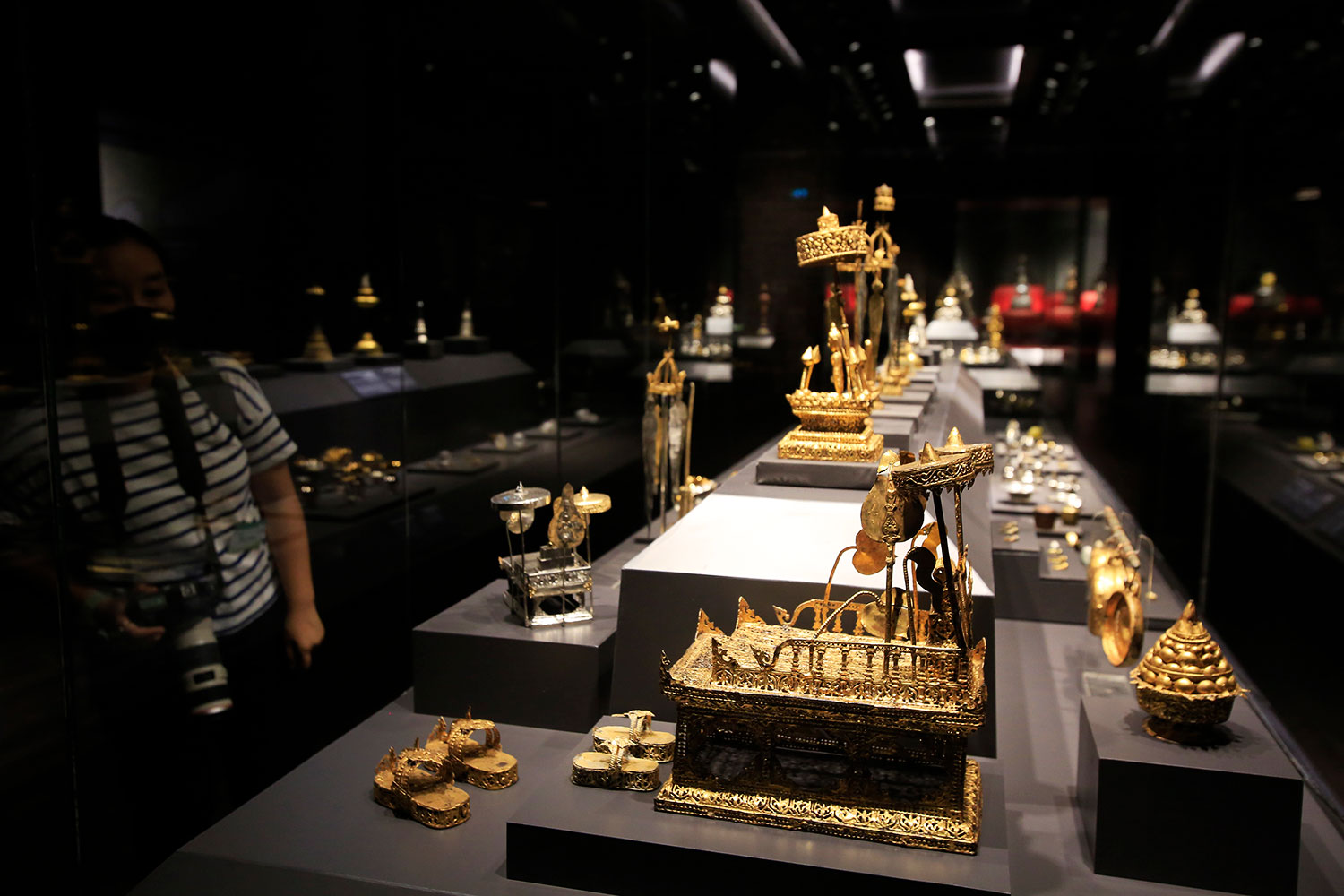 A wide selection of miniature Lanna-style royal regalia was created to pay homage to Lord Buddha. 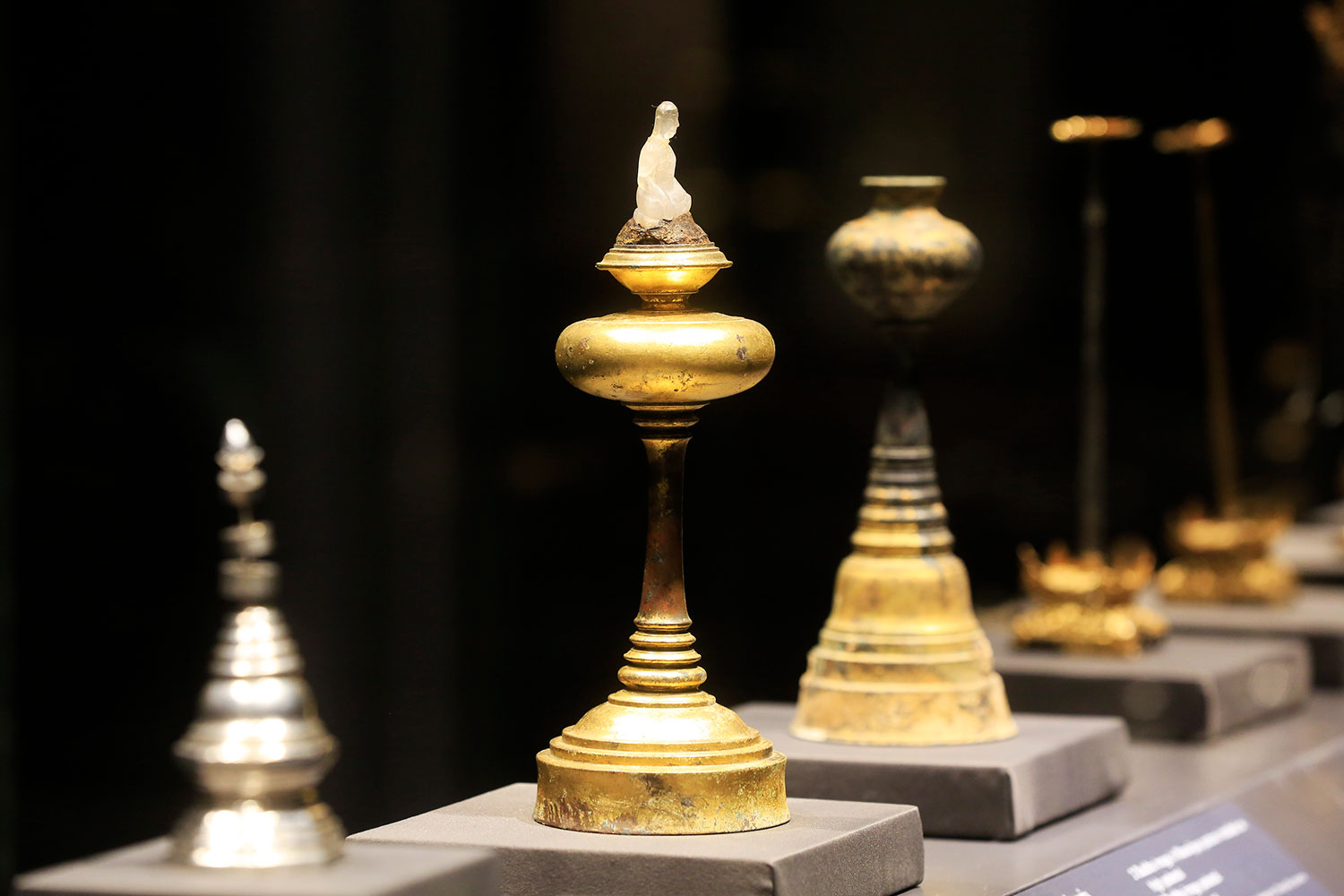 A sacred Lannastyle Buddha statue made from clear quartz. 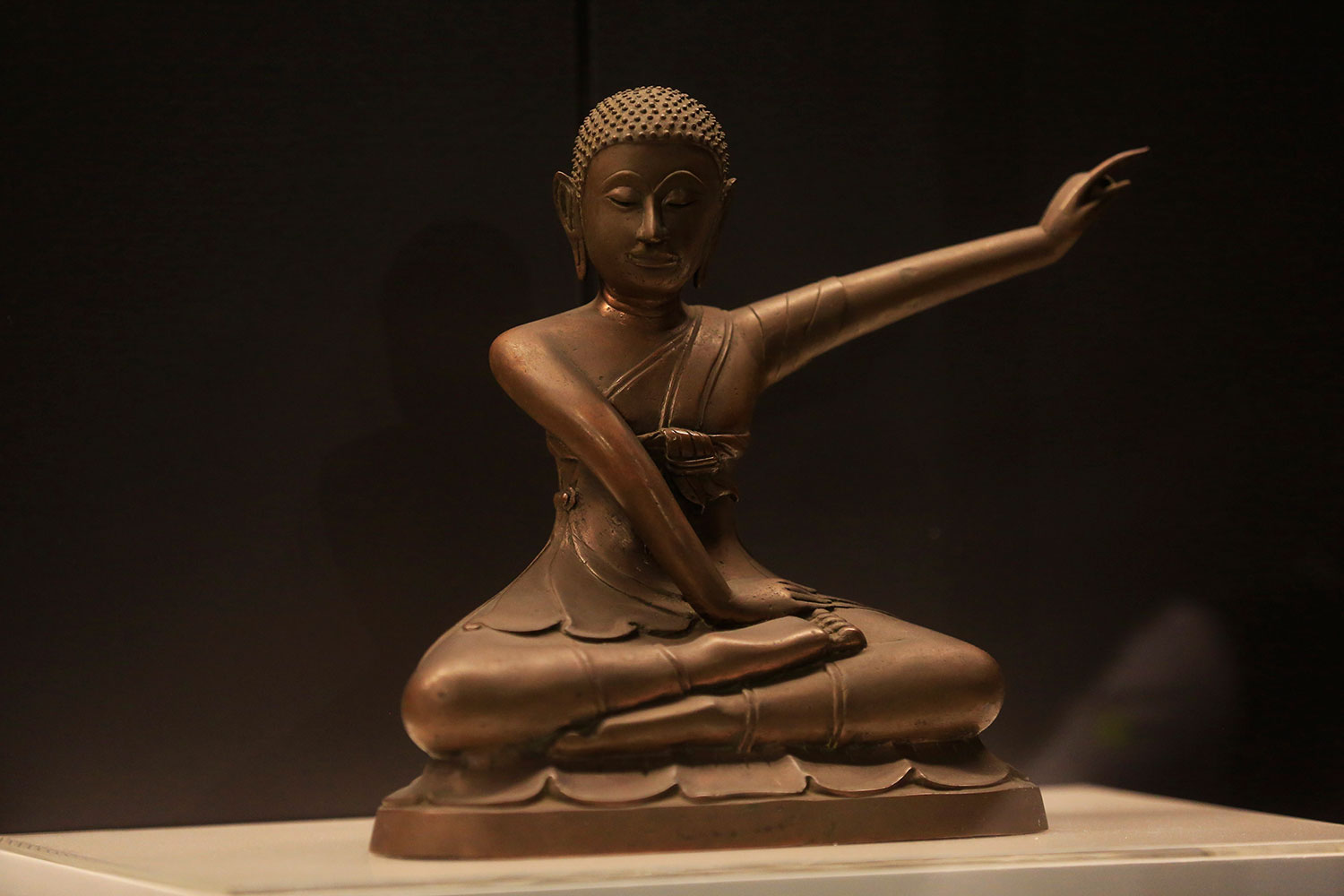 A striking statue of disciple Malai with his left hand pointing out to the side to represent his journey to the second heaven.

"We've been working with Homeland Security Investigations for years to reclaim other smuggled artefacts. We started from these two lintels since photographs and accounts show they originated in Thailand. There are still 32 other pieces on the waiting list, including ornate pillars, pediments, door frames and Hindu deity-inspired statues, Dvaravati-style Buddha images and chasing and repousse works. This time, we have to rely on art education to prove that they were previously in Thailand and their distinctive style can't be found in other countries."

However, foreign collectors continued to place orders and attempted to move antiquities out of the country illegally. For instance, the lintel from Prasat Koo Suan Taeng in Buri Ram's northeast was stolen in 1964 and ended up in Avery Brundage's private collection before being returned to Thailand in 1970.

Between 1960 and 1961, another lintel was stolen from Prasat Phanom Rung and appeared in James W. Alsdorf's art collection, which was on loan to the Art Institute of Chicago for an exhibit. Later, a prolonged campaign was launched before it was finally returned to Thailand in 1988.

After the three-month exhibition in Bangkok, the pair of historic lintels will be temporarily relocated to the national museums in Surin and Prachin Buri until the FAD and local authorities can find a safe place to store them.

"Theoretically, archeological items are national property and must be stored in national museums spread over 40 provinces. However, local museums would be the best place to store them with the FAD having the ability to transfer them to local communities under an agreement. Since both Prasat Nong Hong and Prasat Khao Lon don't have their own museums, we are currently discussing with locals to establish the safest home for these two lintels," Prateep said.

"These two items can be restored in historical sites to boost tourism but local authorities must improve security systems and maintenance to ensure their safety."

Somchai Korchaisirikul, mayor of tambon Non Din Daeng in Buri Ram, said: "Today, the municipality is responsible for taking care of Prasat Nong Hong that stands in the same land of Non Din Daeng College of Technology and Management. We want to bring this lintel back to our hometown so that our younger generations can learn about history. We have civil defence volunteers and can install CCTV cameras to guard the historical site, so the FAD doesn't have to worry about safety. We don't want to focus on how much money we can earn from tourism but we want to turn this historical site into a learning centre for younger generations. Besides the ancient lintel, we have more interesting objects to display."

Just a stone's throw away from the Issaravinitchai Royal Hall, the Thai-style Prapatphiphitthaphan building has reopened its doors to welcome visitors after undergoing extensive renovation. This two-storey building now houses an astonishing collection of more than 900 artefacts to celebrate Thailand's long history and rich cultural heritage.

"Artefacts were presented in several groupings during the reign of King Rama VII until they were rearranged in 1967 according to the era in which they were created. Now, this newly renovated building exhibits antiques from the 18th century BC until present day. As part of the renovation of Wang Na [Front Place], Prapatphiphitthaphan's layout has been redesigned so that visitors can view an exhibition in 360 degrees," said curator Yutthanawarakorn Saengaram.

The exhibition is divided into five zones, starting with Room 501 featuring Lanna, an old kingdom established in 1296 by King Mangrai which was once a major trading hub in the northern region.

This ancient Lanna kingdom was famous for northern-style craftsmanship that represents Buddhist beliefs and a unique mixture of Hariphunchai, Pagan and Lanka culture. The highlights include a rare collection of timeworn ivories on a three-tiered lion-like base, which were carved to look like Myanmar-style Buddha statues in the subduing Mara posture.

Created between the 12th and 13th centuries, the Hariphunchai-style gold Buddhist votive tablet stands on a lotus and comes with a round face, down-cast eyes and connected eyebrows. It is dressed in thin robes that reach the ankles, which is believed to be influenced by Bagan culture.

Back in the 16th century, the king would commission artisans to create a wide range of miniature royal regalia as offerings to Lord Buddha. Based on Buddhist beliefs, Lord Buddha was born as a prince, so the selection of gold royal regalia include slippers, miniature thrones, miniature vases with flowers and Patak flag poles in different designs to signify his rank.

The Room 502 is devoted to the Sukhothai kingdom, which was formed in 1249. It boasts a replica of King Ramkhamhaeng's inscription from 1292 discovered in 1833 by King Rama IV while he was ordained as a monk and travelled to the North.

There are three sections. The first one is believed to have been written by King Ramkhamhaeng himself to tell the story of his life from birth to ascension to the throne. The second part was written on the wall of the Phra Mahathat stupa in Si Satchanalai while the third part praises King Ramkhamhaeng.

Listed as a Unesco Memory of the World in 2003, this inscription gives a clear picture of how Sukhothai was administered under a father-child rule and how citizens were allowed to engage in discussions about state matters and economic policies.

Visitors can also admire a Sukhothai-style bronze Buddha statue from the 15th century, gilded in cinnabar made from powder and transparent lacquer. They can also learn about historical irrigation systems through glazed stoneware water pipes from the 14th and 15th centuries.

Next door, Room 503 transports visitors back to the glory days of the Ayutthaya kingdom.

On view is a rare collection of votive tablets from the 16th century, which were found in Wat Phra Si Sanphet's crypt, an elaborate Ayutthaya-style pulpit from the 18th century which was once installed at Wat Yai Suwannaram in Phetchaburi province. Also on view are a series of beautifully carved manuscript cabinets inspired by the Jataka and the Himmaphan forest.

After the fall of the Ayutthaya kingdom, Room 504 illustrates how Thailand's capital was built on the banks of the Chao Phraya River and how Thai traditions were resurrected in the Thon Buri and early Rattanakosin eras.

The room is decorated with a gilded lacquer wood platforms with auspicious animal motifs, which King Taksin once used while marching a troop regiment to Rayong province. King Rama I's gilded lacquer folding chair with a leather seat, beautiful Benjarong porcelains, the heads of royal puppets and gold scripture of Phra Pikkhu Patimok made from silk and palm leaf are also on view.

There's also a rare collection of Buddha statues such as Sangha Suphut raising his right hand in a royal rainmaking ceremony; the Buddha standing on Mahisson Deva's head while riding the cow Nandi; and a disciple Malai with his left hand pointing out to the side to represent his journey to the second heaven.

The tour concludes with Room 505 and the Rattanakosin kingdom, which demonstrates how Siam employed modern innovation to develop infrastructure and how Western culture expanded to the East. On view are a collection of globes and a miniature train which Britain's Queen Victoria presented to King Rama IV and King Chulalongkorn's first Western-style throne made from wood and fabric and realistic-style Buddha statues. 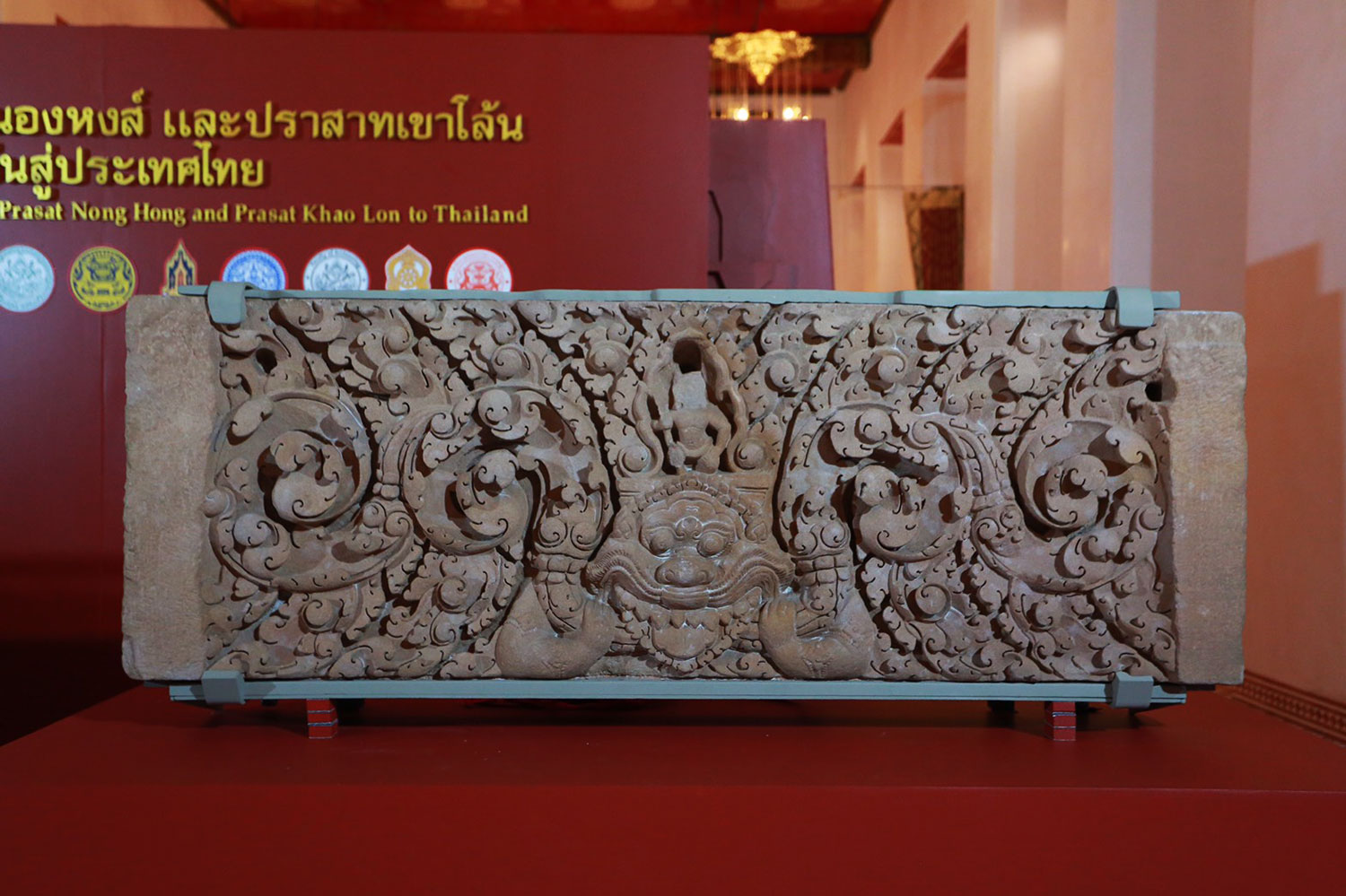 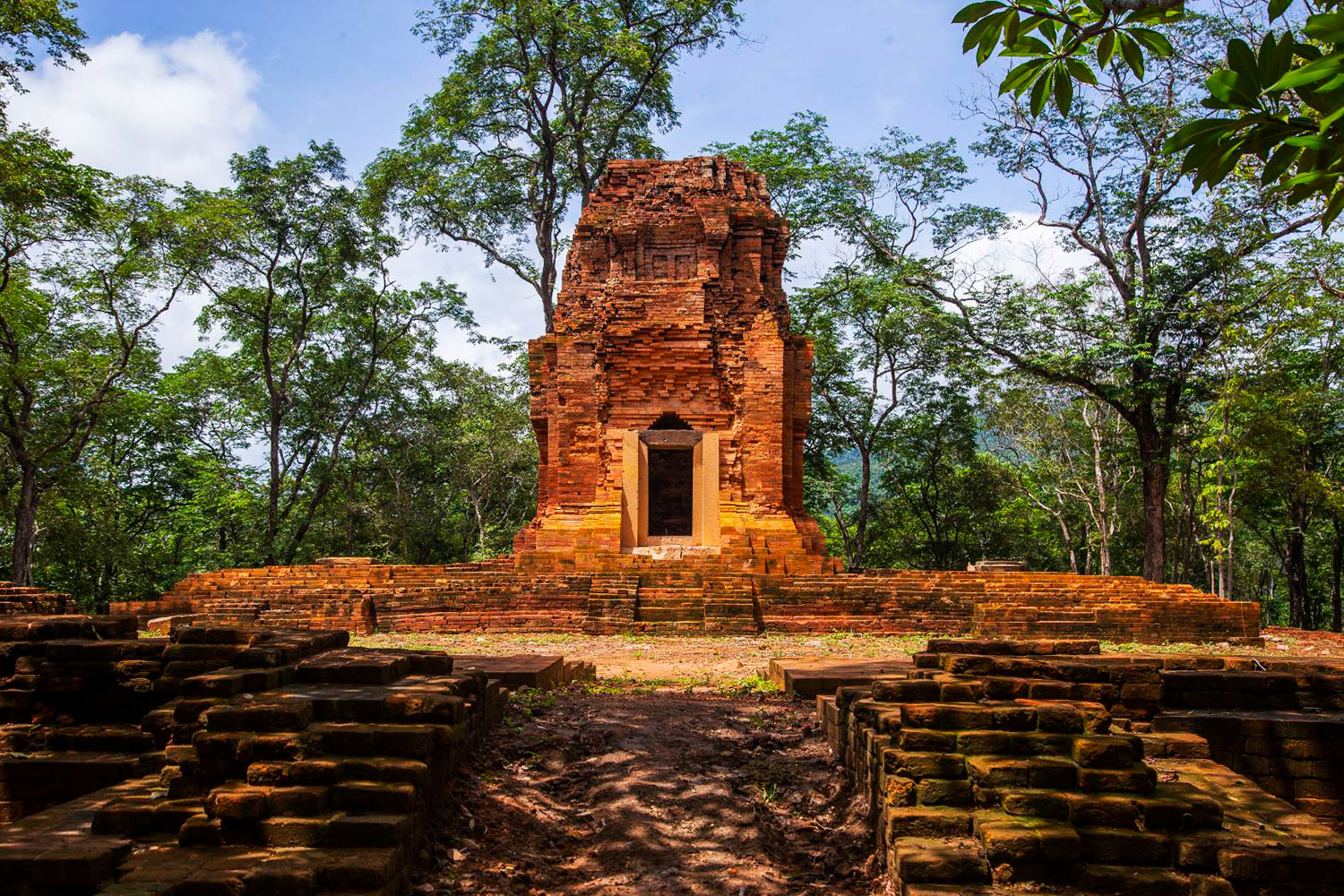 Prasat Khao Lon is situated in the eastern town of Sa Kaeo and is reminiscent Khmer-style art. 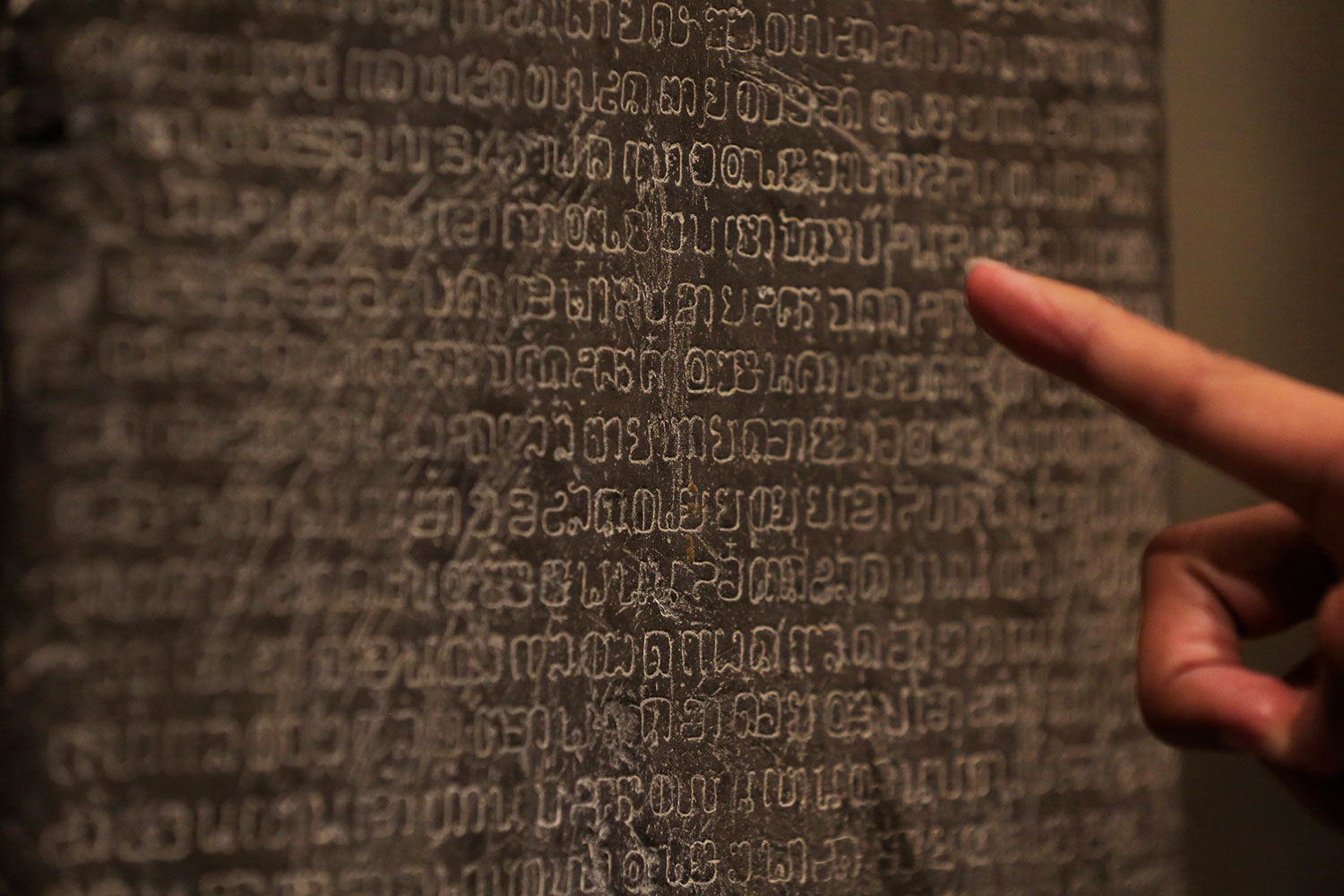 A replica of King Ramkhamhaeng’s inscription from 1292. 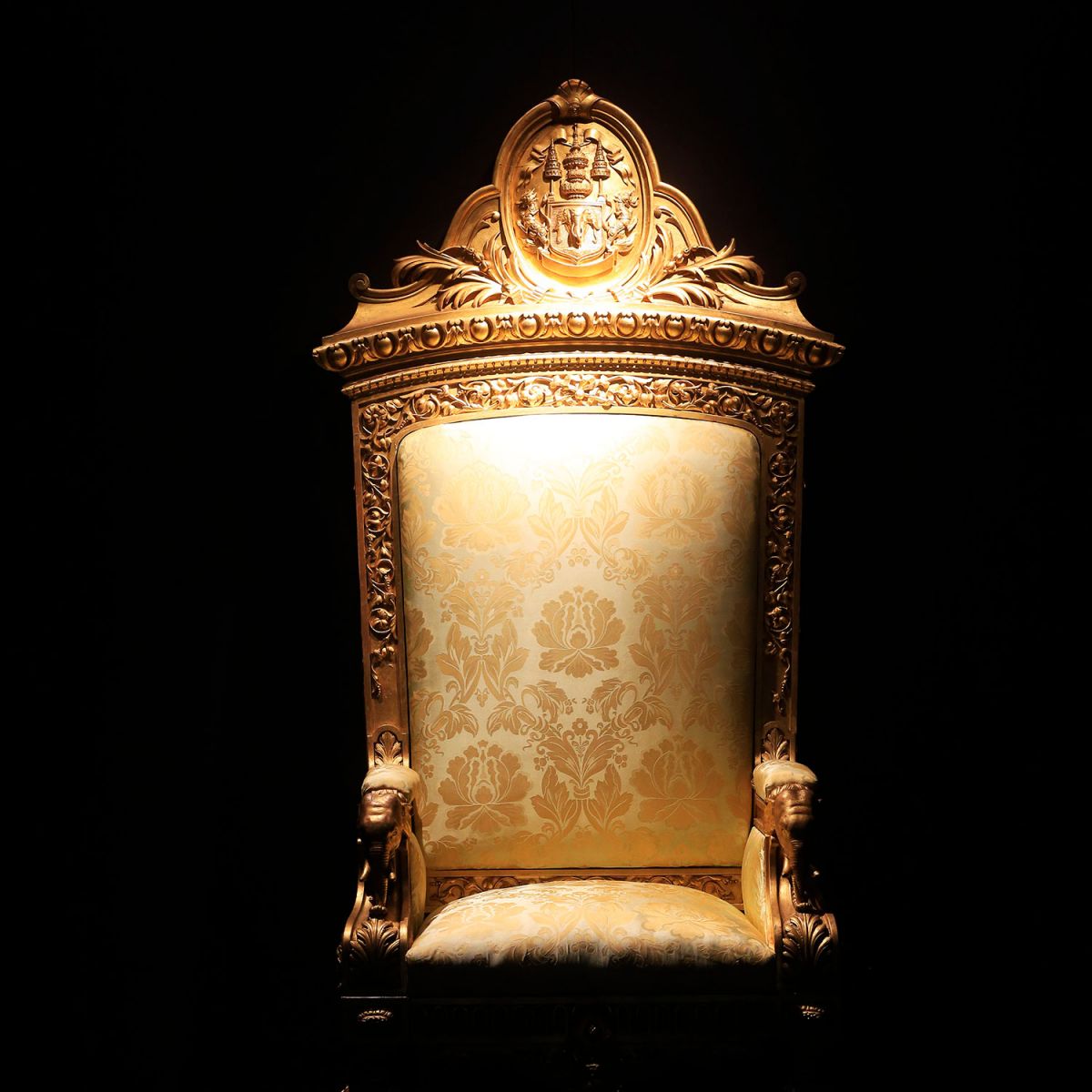 King Chulalongkorn’s first Western-style throne made from wood and fabric. 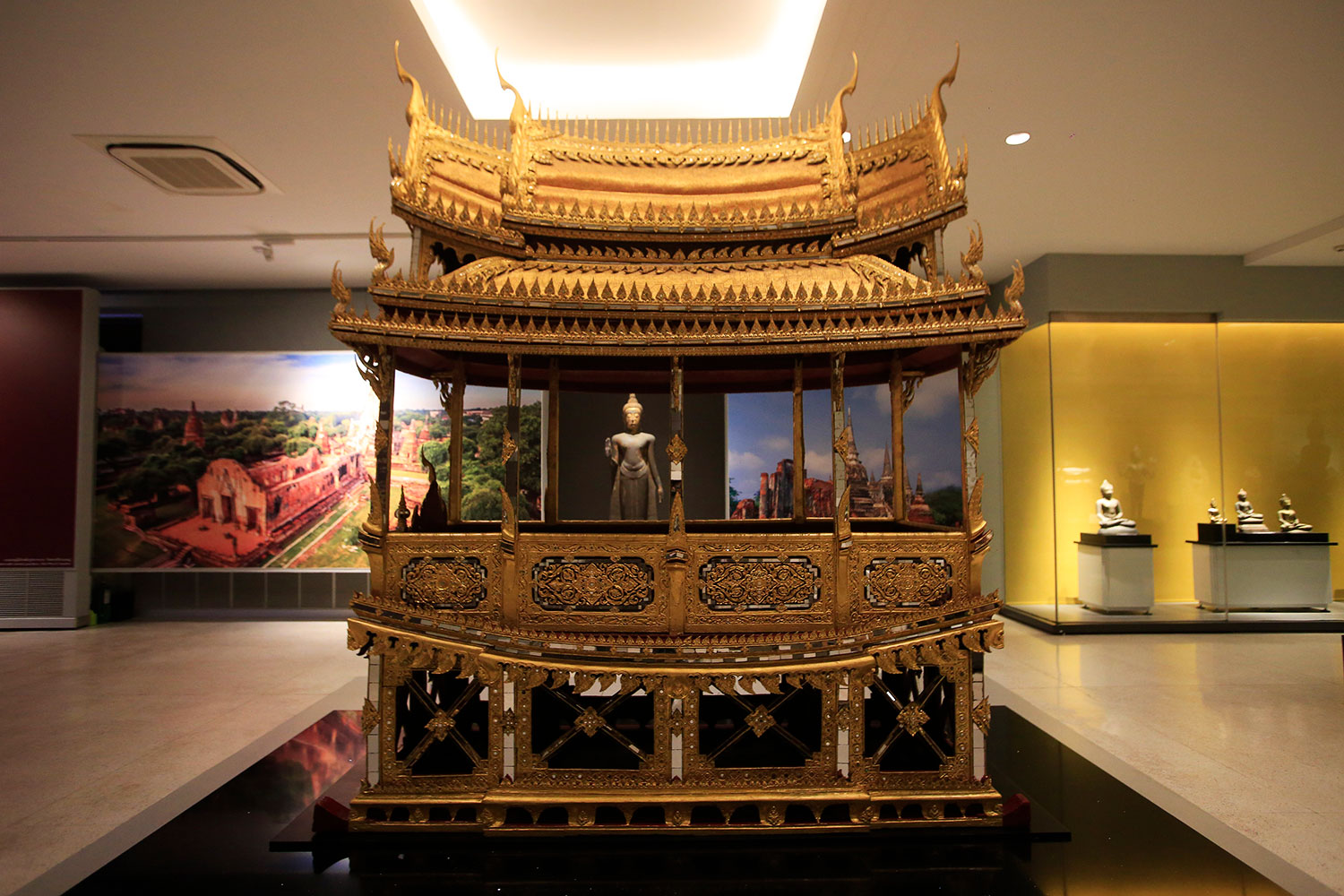 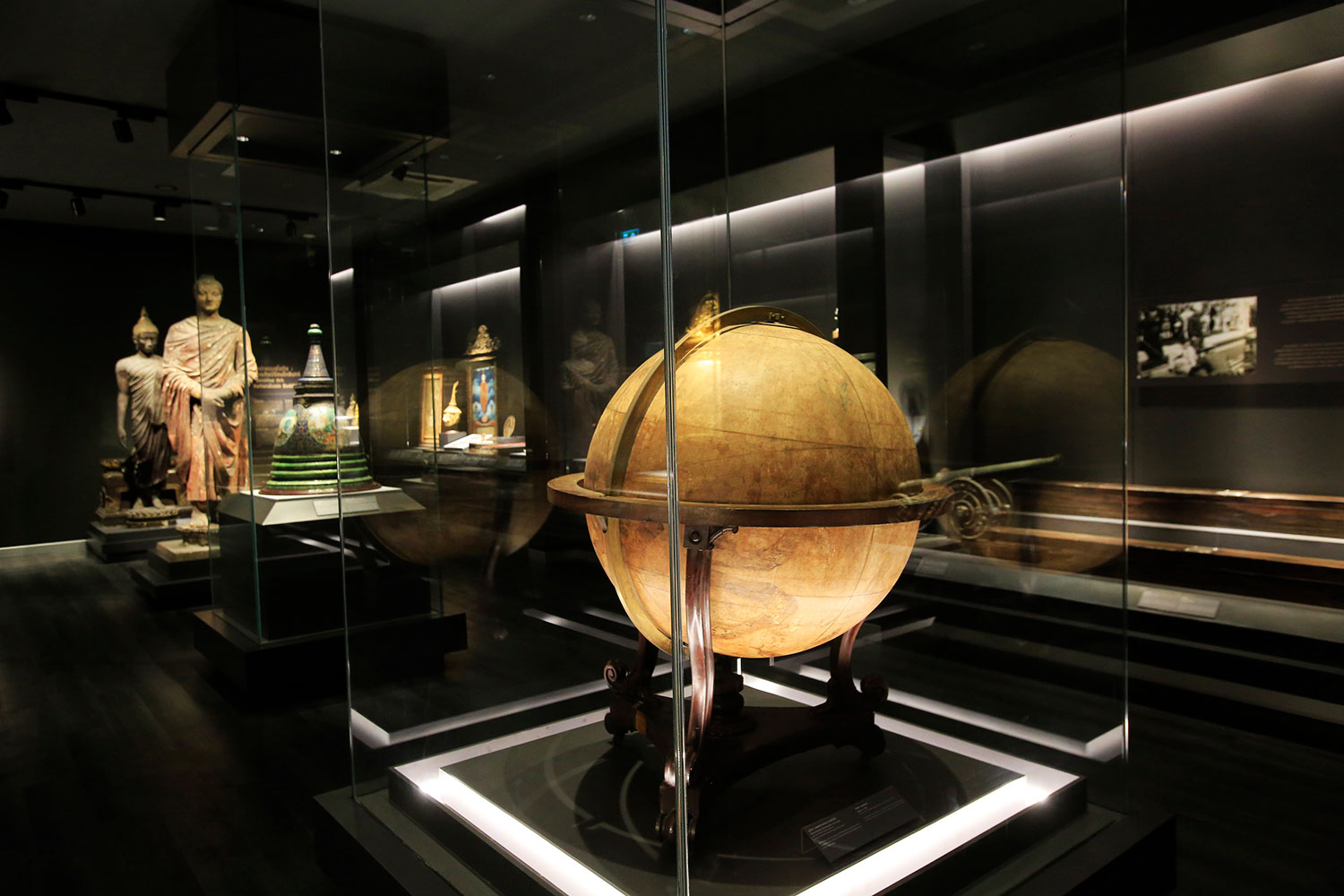 Britain’s Queen Victoria presented a collection of globes and a miniature train to King Rama IV in 1855. 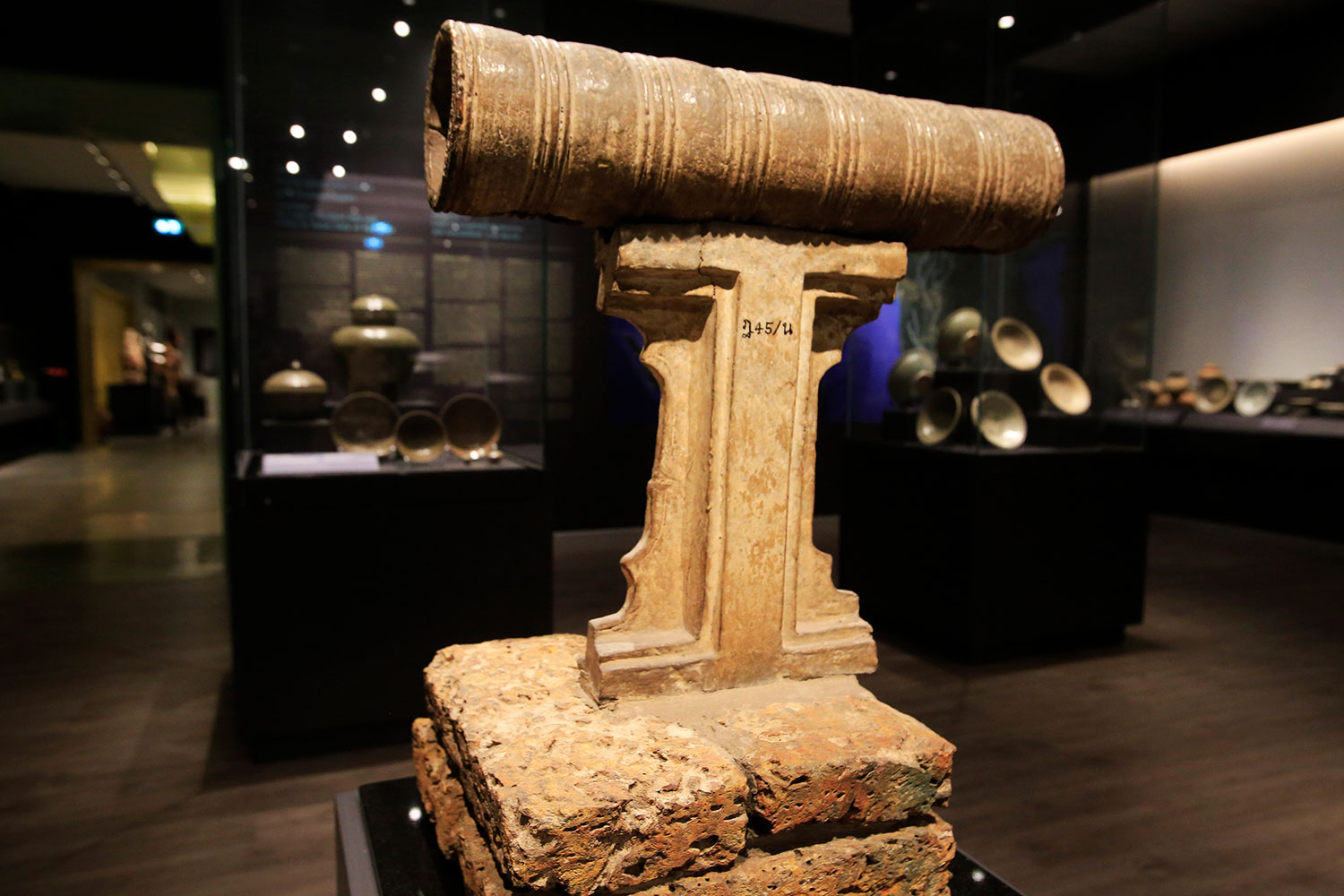 The glazed stoneware water pipe from the 14th and 15th centuries is reminiscent of ancient Sukhothai kingdom’s irrigation system.

The Bangkok National Museum is open from 9am to 4pm, Wednesday to Sunday. Admission is 30 baht for Thais and 200 baht for foreigners. For more information, call 02-224-1333.