Southeast Asia Kept COVID-19 Under Control For Most Of The Pandemic. Now It's Battling Worrying New Surges

At Thammasat University Hospital, about 20 miles north of Bangkok, doctors are scrambling to treat COVID-19 patients streaming in. Nearby, extra beds have been crammed in to a student dormitory block, turning it into a field hospital that can accommodate an additional 470 patients.

In Jan. 2020, Thailand became the first country outside of China to confirm a case of the disease that became known as COVID-19—but it successfully fought off the pandemic for most of the year, recording less than 5,000 cases in a population of 70 million by mid-December. Now the total has skyrocketed 18-fold to more than 90,000 cases as this onetime COVID success story battles a worrying new surge.

A similar pattern is playing out across Southeast Asia. In 2020, the region moved quickly to implement strong public health measures as early cases began to surface. That allowed it to fare relatively well against the pandemic. But now, many countries are facing exponential increases in case numbers—and the situation may get worse.

Abhishek Rimal, the Asia Pacific emergency health coordinator at the International Federation of Red Cross and Red Crescent Societies (IFRC), tells TIME by phone from Kuala Lumpur there are worrying signs that Southeast Asia is an danger of a devastating second wave like the one killing thousands of people a day across India and South Asia.

“What we are seeing in Southeast Asia are the initial symptoms—that cases are increasing in a similar manner to what we were seeing four weeks ago in South Asia,” he says. “The second wave is really creeping across Asia, spreading from South Asia to Southeast Asia.”

Last year, Thailand’s neighbor Cambodia avoided the worst effects of the pandemic, moving quickly to shut down schools and entertainment venues, ban domestic travel and close borders. By mid-February, less than 500 total cases had been reported in a country of 16.5 million people. Now it is recording that many cases each day. For a poor nation with an underfunded health system, this is a potential catastrophe, prompting Prime Minister Hun Sen to warn that the country was “on the brink of death.”

Across the border in Laos, officials have reported less than 1,500 cases, but the case load has increased almost tenfold in the last three weeks—and the landlocked country reported its first COVID-19 related death on May 9. On May 12, Malaysia reported 39 coronavirus-related deaths—the biggest daily tally of fatalities the country has seen since the pandemic began.

Infections are meanwhile spiking in Vietnam. It has notched just 3,740 cases since the start of the pandemic, but community transmissions began climbing sharply in mid-April and health workers have been told to prepare for 30,000 patients. Prime Minister Pham Minh Chinh said the new outbreak would threaten political stability in the communist-ruled state if not brought under control.

The world’s most populous Muslim-majority nation, Indonesia, is braced for a COVID wave in the wake of the recently concluded Ramadan, which saw authorities struggle to enforce a domestic travel ban. And the Philippines is battling a stubborn coronavirus surge despite having subjected its people to one of the world’s longest and strictest lockdowns. 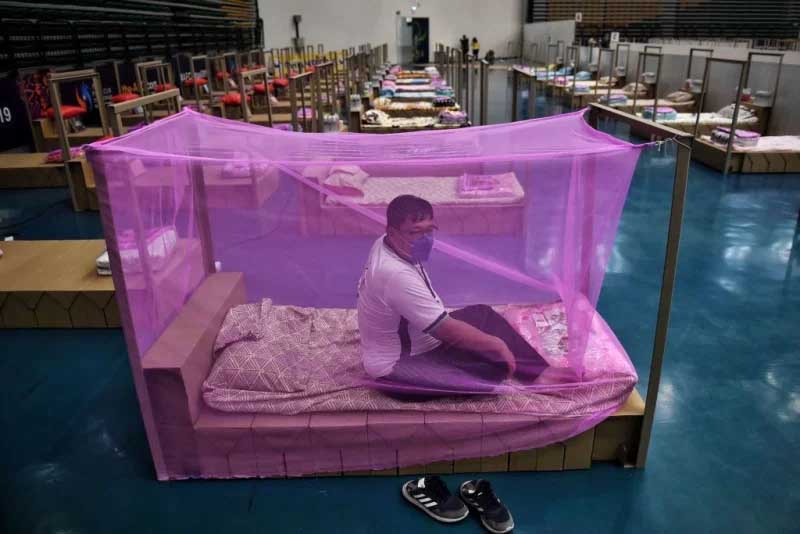 A Bangkok Metropolitan Administration worker tests a bed for incoming COVID-19 coronavirus patients at a new field hospital in a sports stadium on the outskirts of Bangkok on April 18, 2021.
Lillian Suwarnumpha—AFP/Getty Images

The causes of the outbreaks across Southeast Asia vary, but Meru Sheel, an infectious disease epidemiologist at Australian National University, says that the devastating surge on the subcontinent may be having knock-on effects. India is recording more than 350,000 official cases a day—a number that experts believe is an undercount.

Already, the country’s COVID-19 crisis has spilled across its northern borders to Nepal, where a catastrophe similar to what is being seen in India is unfolding and where the health system, in the words of a top health official, “has gone down.” India also adjoins Bangladesh, where there has also been an alarming rise in cases, and Myanmar, which in turn borders Laos and Thailand.

Myanmar’s health system—thrown into disarray by the the Feb. 1 military coup and the violent unrest that followed—is cause for particular concern. “The health service across the country is severely disrupted,” says Rimal of the IFRC. “There’s a lack of testing, there’s lack of contact tracing and also there is reduced capacity to treat COVID-19 patients.”

Such factors make it “really difficult to disconnect South Asia from parts of Southeast Asia,” says Sheel. “We can have border controls and quarantine and they’re very important, but we can’t forget that these are porous land borders. Lots of lives are connected through the borders so there are extra challenges that connectivity poses.”

The prime minister of Vietnam, which has ramped up border checks, said illegal immigrants are among the prime sources of the virus in the country. At least five of Thailand’s recent COVID-19 cases were found in people who slipped across the border from Cambodia, Malaysia and Myanmar. In Cambodia, Erik Karlsson of the virology unit at the Institut Pasteur du Cambodge says the latest outbreak was likely caused by a breach of the country’s strict quarantine measures.

“The Greater Mekong countries are geographically very close to each other with miles of common borders,” says Jeremy Lim, an associate professor in public health at the National University of Singapore. “The movements across borders are substantial and hence the heightened risk of transnational transmission which can be mitigated but not eliminated.”

The surges in Southeast Asia have also been driven by more contagious variants. A virulent strain originally detected in the U.K has been found in several Southeast Asian countries, along with the possibly more dangerous B1617 variant, first found in India. Although it doesn’t yet appear to be fueling widespread outbreaks in Southeast Asia, B1617 has been found in clusters in Singapore—one at a hospital and one linked to its airport. Thailand said on Monday that it had found the strain in four travelers who arrived from Pakistan via Dubai.

Rimal says that it may be a matter of time before the variant starts driving outbreaks. “It is highly likely that these variants might over time reach the community,” he says. “Once it reaches the community it will be much more aggressive and we can see a massive rise of cases.”

Experts say that complacency, and a loosening of restrictions in a bid to boost economic activity, may have also played a part in the recent surges.

In Thailand, the latest wave has been linked to nightclubs in Bangkok. Cases also jumped after Songkran, the Thai New Year famous for its rowdy water fights. Although splashing water and foam parties were banned this year, many Thais traveled to their home provinces for festivities.

“After Thai New Year year, almost all areas in Thailand have COVID-19 infections, so I think it will be too late really slow down” says Apisarnthanarak at Thammasat University Hospital. “We really let go of the opportunity for control.” 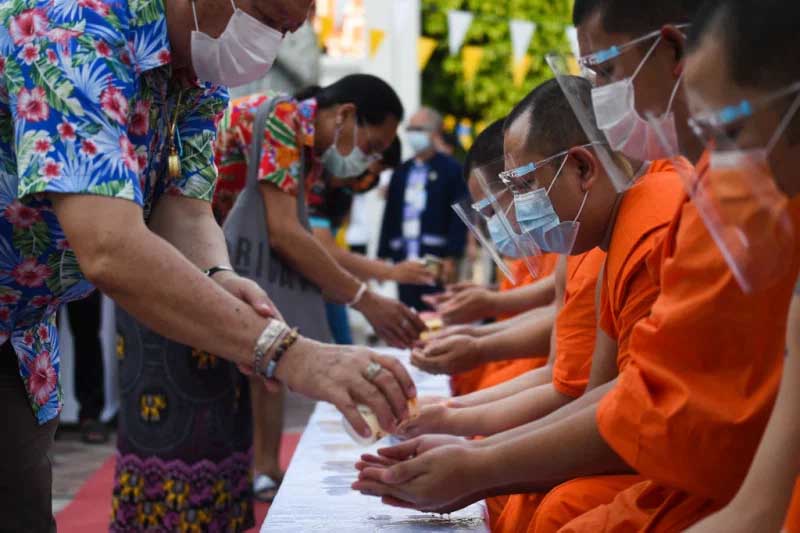 People queue to pour water on a Buddhist statue as they celebrate Songkran, also known as the Thai New Year, at Wat Pho temple in Bangkok, Thailand on 13 April 2021.
Anusak Laowilas—NurPhoto/Getty Images

Health measures in the wake of Southeast Asia’s COVID surges

Many Southeast Asian nations are now doubling down on the strategies that allowed them to successfully fend off COVID-19 thus far. Malaysia has declared a month-long national lockdown. Singapore has reimposed lockdown-like conditions, capping gatherings to two people and banning dining in restaurants. Cambodia’s government imposed a lockdown so strict that it faced criticism from human rights groups, who said that it was preventing people from getting food. Vietnam has increased the quarantine period for incoming travelers and close contacts of confirmed cases to 21 days.

Read More: What We Can Learn From Singapore, Taiwan and Hong Kong About Handling Coronavirus

In Thailand, where dining-in has been banned in six at-risk provinces, and a nationwide mask mandate has been issued, Apisarnthanarak says that it is a critical period in the fight against the virus. He says that the trajectory will be determined by how quickly the government acts, how willing the pandemic-weary public is to follow those measures, and how quickly vaccines can been rolled out.

“The only weapon that you want to fight this with is vaccination,” he says, “so it’s very important that this be implemented very rapidly.”

Rimal says that if Southeast Asian countries “really put forward strong public health measures, there is a chance we will not see a major impact.” But there are many variables—and given the porous nature of the borders in the region, a surge in any country in one country will be felt in the others.

“It will be a bit difficult once we have an India-like or Nepal-like situation in any of the Southeast Asian countries,” he warns. “It will just spread like a bush fire across the region.”